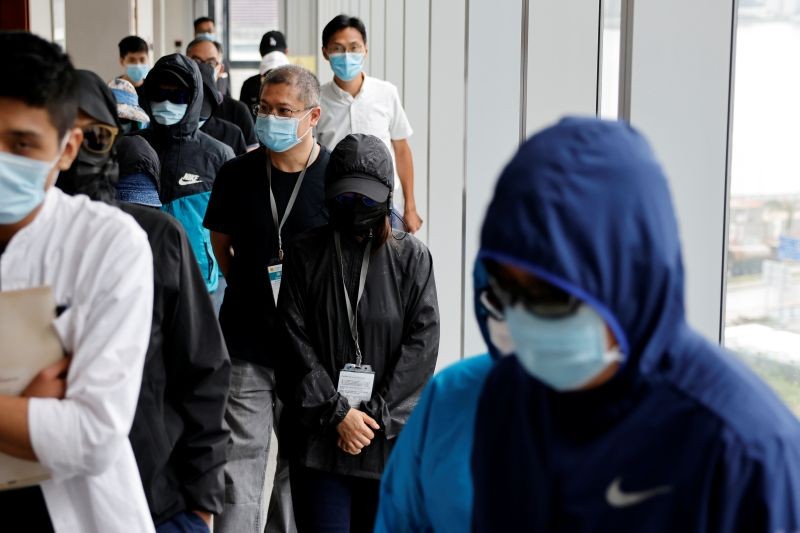 "I am sorry and thanks for accompanying me throughout the years," the hand-written note found on a desk at their home read. "I'm sorry that I can't walk with you anymore... Please take care of yourselves."

Wong, 30, an unemployed dock mechanic facing criminal charges relating to his participation in the protests that roiled Hong Kong last year, had scribbled his message to his wife and his mother on a page torn from a notebook.

He apologised for not repairing their ramshackle house before he departed. "I still haven't had the time to fix the rooftop of our home, but I'm afraid I won't have such a chance anymore," he wrote.

Wong’s wife and mother set out on a desperate search to find him, worried he had killed himself, they told Reuters.

By the time they read his note, Wong was already in the custody of Chinese authorities after a failed attempt to flee by boat the night before to Taiwan with 11 other activists all looking to avoid prosecutions related to the protests.

"When I heard that he's still alive, my heart lit up," said Wong’s wife, who shared parts of her husband's letter with Reuters. She said the note was taken by police as evidence, without any further explanation. Hong Kong police declined to answer Reuters' questions on its investigation.

"But soon I became very nervous," Wong’s wife said, after learning her husband had been detained in mainland China, fearing he would not receive fair treatment there. She said she often wakes up from nightmares. Both she and her mother asked not to be identified fully because of the sensitivity of the matter.

The families of some of the 12 activists now under arrest in China, including a 16-year-old, held a news conference on Sept. 12, masked and hooded to avoid identification. Appearing with two Hong Kong lawmakers, they made a plea to Chinese authorities to allow the detainees to contact family members and be represented by independent lawyers.

China’s foreign ministry, which described the people as separatists, said they have been detained in Shenzhen, the mainland city that shares a border with the northern part of Hong Kong, for illegally crossing into Chinese waters. The ministry referred questions on the matter to the Shenzhen Municipal Public Security Bureau, which did not respond to a request for comment from Reuters.

Florence Wong, a spokeswoman for the Hong Kong government's Security Bureau, said Hong Kong "respects and does not interfere with the enforcement actions of other jurisdictions," in response to questions from Reuters about the people being held. She said Hong Kong would ask for the return of the 12 detainees after they have been dealt with by China.

Carrie Lam, the city's leader, told reporters at a news conference on Tuesday that the detainees must face justice in China and Hong Kong had no legal basis to demand any particular rights such as presumption of innocence, fair trial or legal representation.

The incident has become another flashpoint in U.S.-China relations and fuelled tension between Beijing and Taiwan. Secretary of State Mike Pompeo said earlier this month that the United States was deeply concerned about the case, saying the detainees had been denied access to lawyers of their choice.

Pompeo and other international critics say China’s imposition of a national security law on Hong Kong in June has threatened established civil liberties and rule of law in the former British colony.

China says the law, which punishes anything it deems to be subversion, terrorism, collusion with foreign forces or an attempt to separate Hong Kong from China with up to life in prison, was needed to bring stability back to the financial hub after a year of mass anti-China protests.

Ten of the 12 arrested after the failed attempt to flee by speedboat to Taiwan had faced charges including rioting, arson and police assault. One stood accused of colluding with foreign forces under the new law.

Wong had been arrested on Jan. 16 for allegedly making explosive substances. He was only one of hundreds of Hong Kong democracy activists and protesters who have left the city by sea and air over the past year or so.

He joined a group of 10 other men and one woman before dawn on Aug. 23 to board a speedboat berthed in a quiet fishing village before setting off for Taiwan, around 600 km (375 miles) away. If weather conditions are good, the trip can be completed in less than a day.

On the way, Wong and the others were apprehended by a Chinese coastguard vessel and sent to a detention centre in Shenzhen, Chinese authorities said.

‘I WILL WAIT FOR HIM’

Wong met his wife, originally from mainland China, during a holiday in Vietnam in 2014. They moved into a modest village house in Hong Kong looking onto fields. But they were happy, she said.

Before Wong's arrest in January, their life was simple, she said. They dreamt of finally going on a honeymoon in Japan, reshooting their wedding photos and having a child after saving up enough. They planned to buy a flat and retire in mainland China.

Police said Wong was arrested after a raid on his home found a beaker, a measuring cup, chemicals and electronic equipment they suspected could be used for producing explosives. He has been charged with making explosives, which if done with intent to endanger life, carries a punishment of up to 20 years in prison. Neither Wong nor his wife has commented publicly on the charge.

He was released on bail on Feb. 14. The High Court ordered surveillance cameras to be installed at Wong's home. A date had not been set for his trial.

After Wong’s arrest, his mother said they stopped meeting relatives and friends, worrying they would cause them trouble by association.

When Wong fled and skipped bail, $96,000 was confiscated by the court together with fees his wife said she had set aside to hire an independent lawyer. Half of the family’s savings vanished, his wife added.

Hong Kong police confirmed the charge Wong faces, but declined to answer any further questions from Reuters on the case.

Wong’s wife said she has received no official information about her husband except an Aug. 28 letter from Hong Kong police notifying the family he faced criminal prosecution in China. Hong Kong authorities said the 12 would be represented by mainland lawyers chosen by the detainees from a list given to them by Chinese authorities.

Wong’s wife said the mainland lawyer she hired to represent her husband was not allowed to meet him. That lawyer declined to comment to Reuters, saying authorities warned him his lawyer’s licence would be revoked if he conducted media interviews.

"He doesn't need to worry about us. I will safeguard this family with his mother,” Wong’s wife told Reuters. "I will wait for him for the rest of my life."