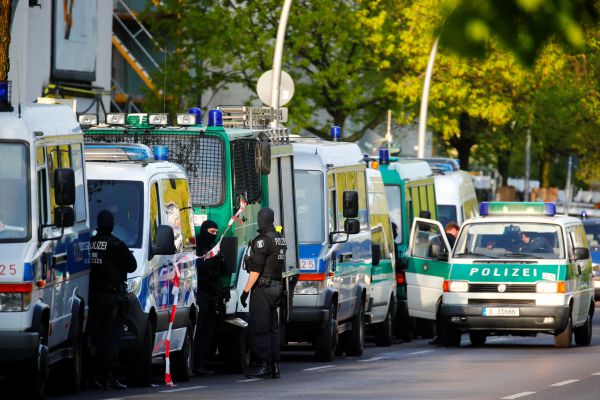 German special police gather near the El-Irschad (Al-Iraschad e.V.) centre in Berlin, Germany on April 30, after Germany has banned Iran-backed Hezbollah on its soil and designated it a terrorist organisation. (REUTERS Photo)

BERLIN, April 30 (Reuters): Germany banned all Hezbollah activity on its soil on Thursday and designated the Iran-backed group a terrorist organisation, a much-anticipated step long urged by Israel and the United States.

"The activities of Hezbollah violate criminal law and the organization opposes the concept of international understanding," said the interior ministry in a statement.

The move means that Hezbollah symbols are banned at gatherings and in publications or in the media and Hezbollah assets can be confiscated, said the ministry, adding as it is a foreign organisation, it is not possible to ban and dissolve it.

Security officials believe up to 1,050 people in Germany are part of what they describe as Hezbollah's extremist wing.

Israel, which with the United States had been pushing Germany to ban the group, praised the move.

"It is a very important decision and a valuable and significant step in the global fight against terrorism," said Israeli Foreign Minister Israel Katz.

"I call on other European countries as well as the European Union to do the same. All the parts of Hezbollah, including the social, political and military wings are terror organizations and they should be treated as such," he added.

Previously, Berlin had distinguished between Hezbollah's political arm and its military units, which have fought alongside President Bashar al-Assad's army in Syria.

Hezbollah is also a significant backer of the government of Lebanese Prime Minister Hassan Diab, which took office in January.

The EU classifies Hezbollah's military wing as a terrorist group, but not its political wing. Britain introduced legislation in February of last year that classified Hezbollah as a terrorist organisation.

The American Jewish Committee also hailed it as a landmark decision.

As a legacy of the Holocaust, Germany feels a special responsibility towards protecting Israel.

"The organization is therefore fundamentally against the concept of international understanding, regardless of whether it presents itself as a political, social or military structure," it said.

In dawn raids, police searched mosque associations in the western state of North Rhine-Westphalia, Bremen and Berlin which they believe are close to Hezbollah and the private residences of the leaders of each association.

The associations under investigation are suspected of forming part of Hezbollah due to their financial support and propaganda for the terrorist organization, said the interior ministry.