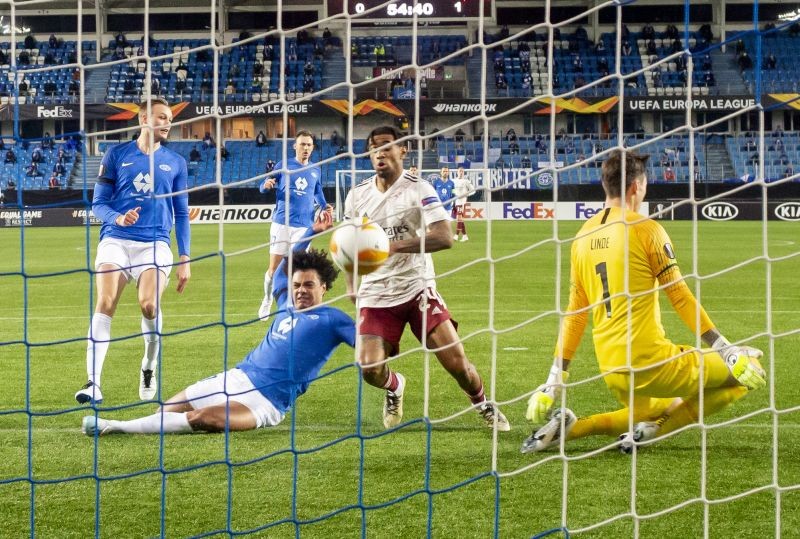 November 27 (Reuters) - Arsenal's record signing Nicolas Pepe got back in manager Mikel Arteta's good books with the opening goal in his club's 3-0 win at Molde on Thursday that sealed his side's place in the Europa League knockout stages with two games to spare.

Arteta's side might be struggling in the Premier League but they are 100% in Group B of the Europa League, making them one of only two teams to have won their opening four games.

The other is Bundesliga outfit Hoffenheim who beat Slovan Liberec 2-0 away to qualify from Group L.

On a hectic night of action across the continent there were many tributes to Argentine great Diego Maradona whose death rocked the soccer world on Wednesday.

Nowhere was his passing felt more keenly than in Naples where Napoli, the club where he is adored, beat Rijeka 2-0 to top Group F.

On an emotionally-charged evening, Napoli's entire team took the field wearing number 10 shirts with Maradona's name emblazoned on the back, while a photograph of the idol stared down from the electronic scoreboard.

No fans were allowed inside the stadium but many gathered outside to chant "Diego, Diego" and other anthems.

Arsenal's win against Molde was sparked by Pepe who was sent off in the Premier League at the weekend for a headbutt Arteta described as unacceptable. But the Ivorian made amends with a well-taken opener meaning he has been directly involved in nine goals in his 10 Europa League games for Arsenal.

Leicester City also qualified for the last 32 after an enthralling 3-3 draw away to Sporting Braga in Portugal.

Fransergio looked to have won it for Braga in the 90th minute but Jamie Vardy struck late in stoppage time.

Leicester are top of Group G with 10 points with Braga second on seven. AEK Athens have three points.

AS Roma also sealed a place in the knockout round after a 2-0 win away to Romanian side CFR Cluj kept them top of Group A.

In Group H seven-time European champions AC Milan were held to a 1-1 draw by Lille after a well-worked Jonathan Bamba goal cancelled out Samu Castillejo's effort for the Italian side.

Lille are top with eight points, one ahead of Milan, with Sparta Prague still very much in the hunt on six after beating Celtic 4-1 for the second time in the group.

Premier League leaders Tottenham Hotspur boosted their hopes of reaching the knockout phase as two goals by Carlos Vinicius, his first strikes for the club, helped them to a 4-0 win over Bulgarian side Ludogorets in Group J.

Royal Antwerp beat LASK 2-0 to stay top although they and Spurs both have nine points.

In Group C Bayer Leverkusen look poised to reach the last 32 after a 4-1 win over Hapoel Beer-Sheva left them on nine points, alongside Slavia Prague who beat Nice.

Benfica came back from two goals down to draw 2-2 with Rangers in Group D. The Scottish club led with goals by Scott Arfield and Kemar Roofe. However, an own goal by James Tavernier threw Benfica a lifeline before Pizzi scored a brilliantly-worked leveller.

Rangers and Benfica both have eight points and are on course to qualify.

Spanish club Granada remain in control of Group E after Alberto Soro scored the winner in a 2-1 triumph over Omonoia while fellow La Liga outfit Villarreal head Group I after a 1-1 draw with Maccabi Tel-Aviv who are second.