Biden declares his administration 'ready to lead the world' 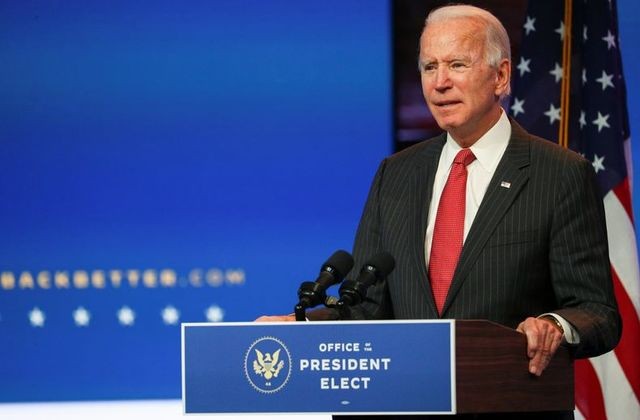 New York, November 25 (IANS): Joe Biden, who is to assume the presidency in January, has announced a policy of reasserting US world leadership as he introduced his foreign policy and national security teams.

The officials he is designating for the key roles in his administration are "ready to lead the world, not retreat from it, ready to confront our adversaries, not reject our allies, and ready to stand up for our values," he declared on Tuesday in Wilmington while outlining his foreign policy.

In talking to world leaders, he said, "I've been struck by how much they are looking forward to the United States reasserting its historic role as a global leader."

Biden was a critic of Trump's brand of "America First" that prioritised the nation's needs and was against military interventions abroad like in Iraq, Libya and elsewhere that the Democrat had advocated or been a party to.

By strengthening ties with allies and working with them, Biden said that he will "truly keep America safe without engaging in needless military conflicts, and our adversaries in check and terrorists at bay."

Those he has picked for his team "embody my core belief that America is strongest when it works with its allies," he said.

In resetting the foreign policy, he said, "Let's begin the work to heal and unite America and the world."

The pick for secretary of state, Antony Blinken said of his approach to foreign policy, "We must proceed with equal measures of humility and confidence. Humility because most of the world's problems are not about us, even as they affect us. We cannot flip a switch to solve them."

He added, "We need to partner with others. But also, confidence, because America at its best still has a greater ability than any country on earth to bring others together to meet the challenges of our time."

Jack Sullivan, who will be the national security adviser, said, "We will be vigilant in the face of enduring threats, from nuclear weapons to terrorism."

Without mentioning China by name, Biden spoke of the looming "competition for the future" and said the US would have to "do things like counter the predatory trade practices of our competitors and adversaries."

But also, he said, "We need to invest in our people, sharpen our innovative edge, and unite the economic might of democracies around the world to grow the middle class and reduce inequality."

Biden gave high priority to the environment and climate change as he introduced his high-powered envoy for the issue, John Kerry, a former senator, candidate for president and secretary of state.

"For the first time ever, the United States will have a full-time climate leader who will participate in ministerial-level meetings," he said. "The world will know that one of my closest friends -- John Kerry -- is speaking for America on one of the most pressing threats of our time."

Kerry's remarks indicated the Biden administration will be pressuring other to do more to fight climate change.

He said, "No country alone can solve this challenge. Even the United States, for all our economic might, is responsible for only 15 per cent of global emissions. The world must come to this table to solve this problem."

The US, however, has only 4.22 per cent of the world population.

He said that all the nations must increase their commitments to cutting greenhouse gases at the UN climate change conference next year in Glasgow "or we will all fail, together".

Biden welcomed the decision by the Trump administration's General Services Administration on Monday to provide his transition access to information for a "peaceful transition of power" to enable him "to control the pandemic, build back better, and protect the safety and security of the American people."

Meanwhile, Trump made a rare appearance since the election for what was probably his shortest news conference to celebrate the stock market barometer, the Dow Jones Average, crashing through the 30,000 mark even though he had predicted that the market would crash if Biden won. He spoke about 60 seconds and left without answering the questions shouted at him.

Later, he conducted the annual faux ritual of the president "pardoning" a turkey from slaughter for the traditional Thanksgiving Day meal that features the bird as the main course.