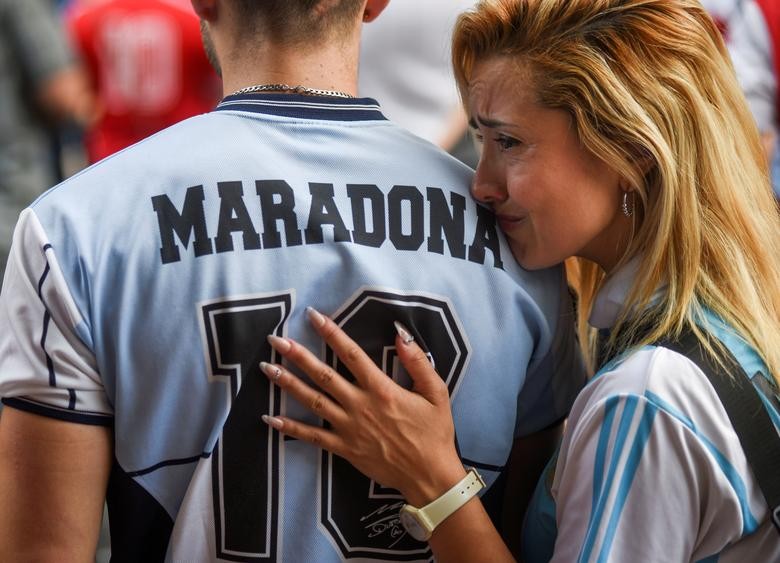 FIFA World Cup in the 80s and 90s was a time when almost half the locality would crowd at the house of the lone television owner in the colony.

The young and old alike would cheer for their respective teams. One name that stood out among football fanatics in Nagaland was Diego Maradona.

His infamous ‘hand of God’ goal which saw the elimination of England from the World Cup in June 22, 1986 was just the kind of entertainment football fans live for.

In the same match, four minutes later, he dribbled past an army of defenders and scored another sensational goal, winning the match for his country.

But more than that match, Maradona won many hearts across the globe that night.

Soon after, World cup and football in Nagaland became synonymous with Argentina because of Diego Maradona, and remained so for many years.

Some did not even bother to know his first name. ‘Maradona’ was enough.

At every World Cup, the same scene would ensue.

Eli from Dimapur shared how an elderly neighbor would look for Maradona in every Football World Cup match. “No matter who was playing, that uncle would proudly say that he is supporting Maradona,” he recalled.

“I can barely remember the '90 FIFA World Cup. But one thing I can remember clearly-- the name Maradona,” Imkong from Dimapur shared.

“There was even a song in a local Naga dialect that roughly translates to ‘Uncle Maradona, don't be sad/angry. It wasn't your fault, it was the referee's...’ That is how I remember Maradona and became an Argentine football team supporter every 4 years since then,” he added.

Such was the reach of the Argentine legend who was not just a hero in his hometown, but a revered figure in football and a household name all over the world.

Many would recall the ‘scheduled’ visit of Maradona to Nagaland in 2016 which generated so much excitement, although it never materialized. According to reports, Maradona was to witness an exhibition match in Kohima on December 12 that year, but he ‘cancelled his trip’ much to the disappointment of fans.

Off the pitch, his lifestyle and struggle with alcoholism and drugs was a topic of great debate among fans and critics alike.

At 60, Maradona had seen his share of fame and controversy, but through it all, he remained an inspiration for young players and fans all over the world.

When news broke about his death on November 25, almost the entire world was left in shock. Tributes poured in for the legend, widely regarded as one of the greatest footballers of all time.

The scene in Nagaland was no less. Aka’s family WhatsApp group discussed the news about Maradona’s demise as if a relative had passed away. Uncles, aunts and cousins exchanged condolence messages for him.

“In 1986 as a school kid, after the @FIFAWorldCup finals, I woke up happy & smiling with this image of my hero in my mind (actually looking forward to classes). This morning was so so different.. rest well #Maradona .. thank you ...”  Abu Metha, Advisor to Nagaland Chief Minister tweeted.

Temjen Imna Along, Minister of Higher and Technical Education and Tribal Affairs, Nagaland also took to Twitter to offer condolences. “Football and the world of sports have lost one of its greatest players today. Saddened to hear about the passing away of the great Diego Maradona. My condolences, Rest in Peace,” he wrote.

“When a task is well done or anyone brings good result my folks back home always say Maradanaaaaaa referring to the legend Maradona.  Rest in peace 'legend' we will still continue using maradanaaa for any task perfected,” Shatilo from Kohima wrote on Facebook.

“Diego Maradona, the first footballer's name I became familiar with as a kid,” Nuno shared. She recalled how for some people, it was more about supporting Maradona than Argentina in the World Cup, while adding “Forever he will continue to live in our hearts.”

Lironthung Lotha, Nagaland defender who is currently with Roundglass FC Punjab recounted watching Maradona on television and called him a great player. “His sudden death had shocked the world but his contribution towards football will live forever,” he shared.

“Thank you #MARADONA for inspiring me to love & follow FOOTBALL and ARGENTINA in the late 80s to this day. You inspired & disappointed me to heights and I still love you.

In his tribute to the late Argentine legend, Kallol Dey wrote, “Maradona (and Brazil) instilled in me the love for Latin American style of football, and got me intrigued about the history and culture of South American countries. For our generation, Maradona is a culture. 1960-Forever…”

With the ‘hand of God’ and a ‘left foot from heaven’, Diego Maradona was forever the newsmaker in his lifetime and will now live on in the hearts of his fans.