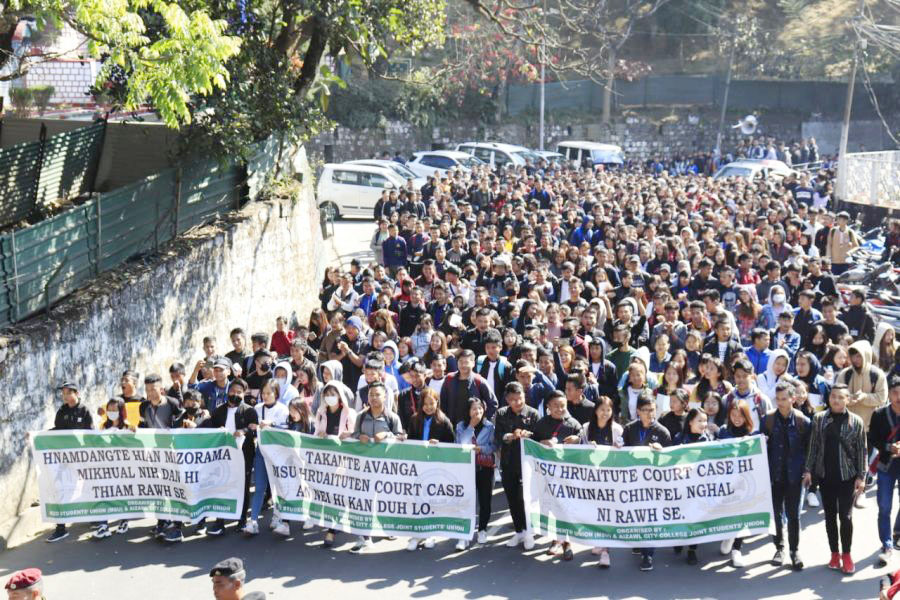 Thousands of students on Tuesday protested in front of Vanapa hall in Aizawl demanding the state government to immediately dismiss criminal cases against their leaders.

The agitation was spearheaded by Mizo Students’ Union (MSU) and Aizawl City College Joint Students Union (ACCJSU) to extend solidarity to their six leaders, who were summoned by a district court over two separate cases.

MSU president Vanlalliana said that six leaders of MSU and ACCJSU, including former MSU president RB Lalmalsawma were summoned by Aizawl district court due to cases filed by the authority of National Institute of Technology (NIT) and a Chakma House liaison officer in 2017 and 2018 respectively. The leaders were asked to appear on February 4 and February 25, he said.

In September 2017, the officer in Aizawl lodged criminal complaint at Vaivakawn police station against the student leaders when functionaries of MSU and ACCJSU allegedly stormed the Chakma House to express their disapproval against the alleged assault on students by certain group of youths in Chawngte town in south Mizoram’s Lawngtlai district.

Police had arrested six student leaders, who were later released on bail.

In 2018, another criminal complaint was lodged against the leaders for allegedly intimidating a NIT director for failing to take action against a professor, whose transfer had been sought by the students due to his alleged misbehaviour.

Vanlalliana said that the student leaders refused to appear before the court on the ground that they were working for the welfare of the students.

He said that the agitating students on Tuesday demanded the cases be immediately dismissed failing which it would launch an indefinite strike on the Chakma house.

According to the student leader, the students also marched towards the Chakma House at Aizawl’s Hunthar locality but the agitation was called off mid-way after they were informed that the cases have been dismissed.