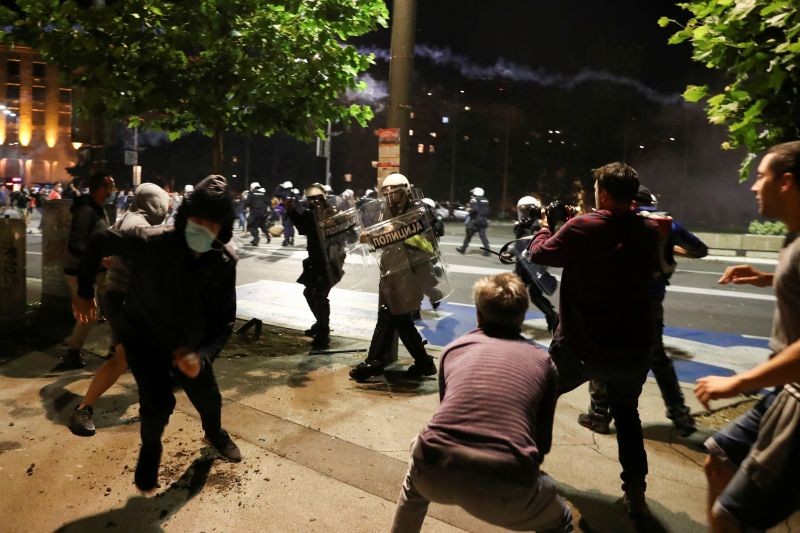 Demonstrators clash with security forces during a protest against a lockdown planned for the capital this weekend to halt the spread of the coronavirus disease (COVID-19) in Belgrade, Serbia on July 7, 2020. REUTERS Photo)

BELGRADE, July 8 (Reuters): Dozens of demonstrators and police were injured in overnight rioting in Belgrade, triggered when a crowd stormed Serbia's parliament in protest at plans to reimpose a lockdown following a surge in coronavirus cases.

Footage showed police kicking and beating people with truncheons while protesters pelted officers with stones and bottles, after thousands chanting for the resignation of President Aleksandar Vucic gathered outside the building.

Police director Vladimir Rebic said on Wednesday that 43 police and 17 protesters were injured and 23 protesters had been arrested.

"A handful of hooligans will not succeed," he said overnight in a live broadcast on state-run RTS TV after the crowd was dispersed.

Vucic announced the new lockdown on Tuesday, saying it was needed because of the rising number of coronavirus cases. It is due to run over the coming weekend and will cover Belgrade and possibly also other areas.

The government's critics say its decisions to allow soccer matches, religious festivities, parties, and private gatherings to resume, and parliamentary elections to go ahead on June 21, are to blame for the spike in infections.

Serbia, a country of 7 million, has reported 16,168 confirmed COVID-19 cases and 330 deaths, and health authorities say hospitals are running at full capacity and staff are exhausted.

"My old man died from coronavirus, ... this is for my father," a young protester in a rugby shirt shouted in a live N1 TV broadcast on Tuesday evening.

The government says a lack of sanitary discipline among the population is the reason for the rise in cases.

Opposition parties, many of which boycotted an election that Vucic's Progressive Party won by a landslide, say he is using the pandemic and lockdowns to strengthen what they call his autocratic rule, accusations that he denies.