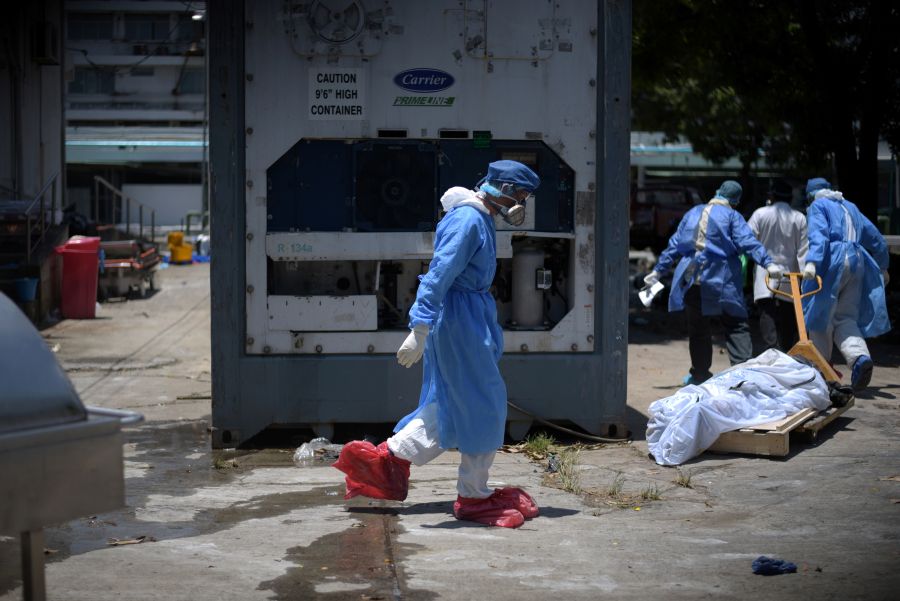 Health workers wearing protective gear bring a dead body past a refrigerated container outside of Teodoro Maldonado Carbo Hospital amid the spread of the coronavirus disease (COVID-19), in Guayaquil, Ecuador on April 3, 2020. (REUTERS Photo)

GUAYAQUIL (Reuters) - Ecuador's government has begun storing the bodies of victims of the coronavirus in giant refrigerated containers as hundreds of deaths in the city of Guayaquil, the center of the country's outbreak, have already filled morgues and hospitals.

Ecuador has confirmed 318 deaths from the virus, one of the highest tallies in Latin America. But President Lenin Moreno said this week that the real figure was higher as authorities were collecting more than 100 bodies a day, many from relatives' homes as a strict quarantine prevented them from being buried.

The government has installed three containers, the largest about 12 meters (40 ft) long, at public hospitals to preserve bodies until graves were prepared, according to Guayaquil's mayor, Cynthia Viteri. So far 150 victims have been buried in a private cemetery in the port city.

At Guayaquil's Teodoro Maldonado Carbo hospital on Saturday, medical workers wearing protective gear removed bodies wrapped in plastic from a storage room and used a pallet to wheel them to one container, according to a Reuters photographer.

"This pandemic is overcoming the capacity of our hospital services," the hospital said in a statement on Friday.

On Saturday, Ecuador's government said it would activate a new digital system that would allow families to find out where their dead relatives were buried.

Moreno said the government expected the total number of deaths in Guayaquil's surrounding province to reach up to 3,500, and said a "special camp" was being built to bury the dead.