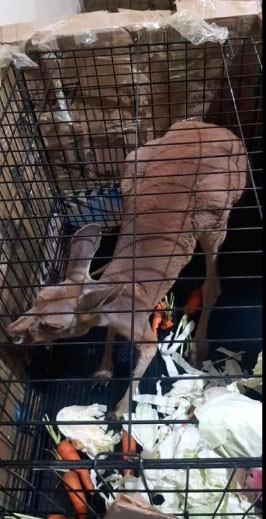 SILCHAR, July 29 (IANS): Assam forest officials have seized some exotic wildlife species, suspected to have been smuggled from Myanmar, and arrested two men from a truck carrying the endangered animals, officials said on Wednesday.

"The Aldabra tortoise, one of the world's largest land tortoises and capuchin monkeys are Central and South American primates found in tropical forests from Nicaragua to Paraguay and they are considered among the most intelligent of the world monkeys," Choudhary told IANS over phone from Silchar, southern Assam's main city.

He said that the exotic wildlife might have been smuggled from Myanmar but the entire matter is now under investigation. During the preliminary interrogation the driver of the truck Narsimha Reddy and his assistant Navnath Tukaram Daigude said that the consignment was destined for Guwahati, Assam's main commercial hub.

"The detainees said that they picked up the consignment from Mizoram for delivery in Guwahati. There are instances that exotic animals are smuggled in from Myanmar and moved to Kolkata and other major cities of the country," Choudhary said.

The IFS officer said that the veterinary doctors are looking after the health of the wildlife. "In the backdrop of COVID-19 pandemic and dismal trade and business, it's a high time to put an end to such illegal trade of exotic species of wildlife. Let these wildlife live in their natural habitat," Forest Range Officer D. Deori said adding that identification of exact species of these animals is underway.

An official release of Assam Public Relations Directorate, Barak Valley Region, said that in its first global report on the illegal wildlife trade, released a week ago, the Financial Action Task Force (FATF) described wildlife trafficking as a "global threat", which also has links with other organised crime such as modern slavery, drug trafficking and arms trade.

The illegal trade is estimated to generate revenues of up to $23 billion a year. Earlier, a big consignment of exotic animals, including venomous snakes and giant scorpions, was seized from a vehicle at Jorabat, about 20 km from Guwahati on the Assam-Meghalaya border. The consignment had come from Mizoram and was to be sold to a trader in Delhi.

Although Mizoram's international border with Bangladesh and Myanmar and inter-state borders with Tripura, Assam and Manipur are sealed in view of the COVID-19 outbreak, smuggling of various drugs, arms and ammunition and other contraband is still going on.

Assam Rifles personnel recently seized 25 trucks laden with betel nuts, worth around Rs four crore, smuggled from Myanmar. Mountainous Mizoram has an unfenced international border of 404 kms with Myanmar and 318 kms with Bangladesh. While the BSF guards the Bangladesh border, the Assam Rifles have been deployed along the border with Myanmar.