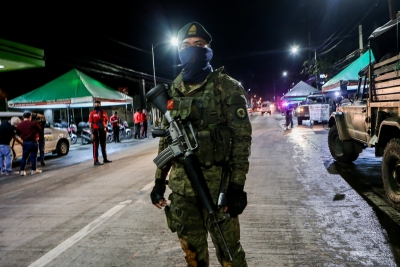 Manila, April 5 (IANS) For the first time since World War II, the Philippines has suspended its Holy Week processions with Catholic devotees celebrating the start of the festival on Sunday by praying at home and joining mass online during a strict coronavirus quarantine.

The majority of the Philippines' 100 million people are Christian, making it the largest Catholic population in Asia and the third-largest worldwide after Brazil and Mexico, reports Efe news.

Holy Week is the biggest festival of the Philippine religious calendar and millions of people across the country participate in the decades-old tradition of "Visita Iglesia" (Church Visit) - which involves going to at least seven churches between Maundy Thursday and Good Friday.

Public celebrations have been cancelled this year as religious establishments have been completely shut down during the quarantine.

The biggest gatherings take place in the San Fernando Cathedral in the Pampanga province, around 80 kilometres north of Manila, which is known for a procession that emulates the Passion of Christ, in which hundreds of devotees take part in bloody rituals like whipping and beating themselves, some even carrying the cross and performing mock crucifixions.

The lockdown has led to the cancellation of these rituals, which date back to the 1950s and have become the most widely known aspect of the festival, despite not being officially approved by the Catholic Church.

As the country is under strict lockdown, the Catholic Bishops' Conference of the Philippines on Sunday urged the faithful to celebrate Palm Sunday from within the confines of their home and follow the religious ceremonies "virtually" on radio, television or the internet.

"Spiritual graces coming from the sacraments that are celebrated by the Church can be imparted to them (through technology)," CBCP spokesman Jerome Secillano said in a televised interview.

Churches and congregations have published timetables for live streaming of Palm Sunday masses on social media and the CBCP aired the liturgy of Philippine Cardinal Luis Antonio Tagle live from the Pontifical Filipino College in Rome, which was followed by thousands of devotees.

Despite government restrictions, some devotees showed up at the major churches in Manila, such as the Cathedral and the Quiapo Basilica - which host the most popular Sunday masses - to pray with palm leaves in front of their closed doors.