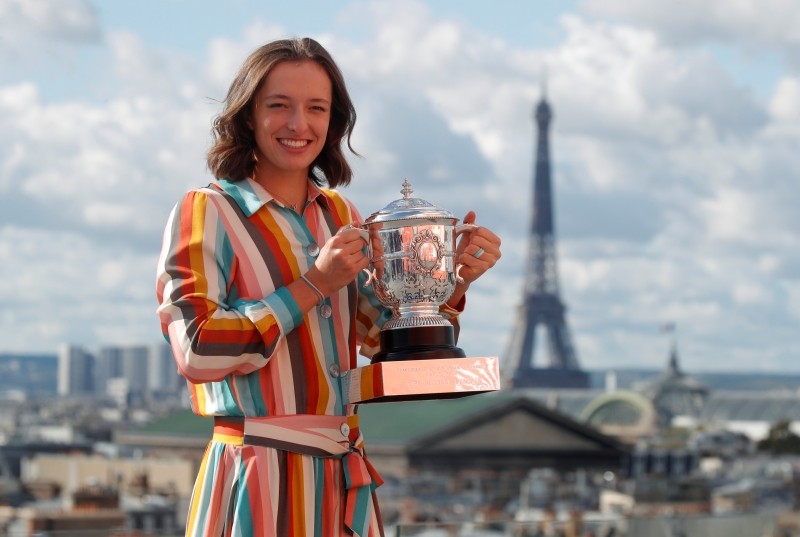 French Open champion Iga Swiatek says she is trying to adjust to her new celebrity status after becoming the first Polish player to win a Grand Slam singles title.

The 19-year-old beat American Sofia Kenin 6-4 6-1 in Saturday's final to become the youngest winner of the claycourt Grand Slam at Roland Garros since Monica Seles in 1992.

"It's pretty crazy here," Swiatek told the BBC after returning to Poland.

"I feel like my life changed completely and I'm trying to get used to that. I left a different Poland that I came back to, because right now I'm kind of popular here."

Swiatek's life has been turned upside down by her victory but she says she can always call on Japan's three-time Grand Slam winner Naomi Osaka for support.

"I'm doing pretty well, but if I'm going to have any problems, then Naomi texted me that I can always ask her for advice or for support," she added.

"We had a quick chat on social media right after the final. I feel like I am supported, so it is great."

Swiatek was the first Polish woman to reach the Roland Garros final in 81 years and the first at any major since Agnieszka Radwanska at Wimbledon eight years ago.

"Basically I was in shock for the next three days," Swiatek said, adding that she would love to have some influence on the growth of the sport in her country. "I couldn't tell you my emotions, because even I don't understand them.

"I always wanted to win all four Grand Slams and to have an Olympic medal, and I always thought of it as a dream. But right now, when I actually won French Open, it stopped like being so distant for me."