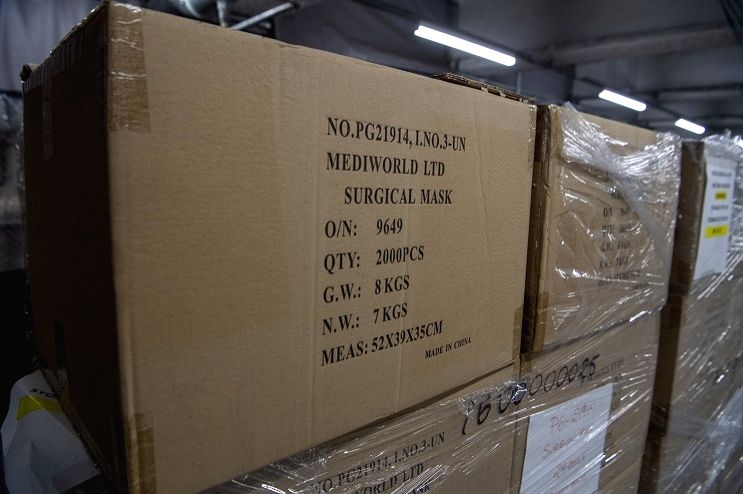 The United Nations donated 250,000 protective face masks on Saturday, March 28, to New York City to help its healthcare workers fighting the Covid-19 pandemic. Some of the masks are seen at the loading dock of the UN headquarters. (IANS File Photo)

WASHINGTON/LONDON, APRIL 5 (IANS): Germany and France have accused the US of confiscating thousands of protective face masks and protective gear meant for their countries, calling it "an act of modern piracy".

About 200,000 N95 masks were diverted to the US as they were being transferred between planes in Thailand, according to the Berlin authorities, The Guardian reported.

Berlin Interior Minister Andreas Geisel said that US officials intercepted a shipment of 200,000 face masks in Bangkok intended for use during the coronavirus pandemic in Germany.

"This is no way to treat trans-Atlantic partners. Even in times of global crisis there should be no wild west methods," the minister was quoted as saying in media reports.

The German media reports said the masks had been made by a Chinese producer for the US company 3M.

The US firm issued a statement, saying: "3M has no evidence to suggest 3M products have been seized. 3M has no record of any order of respirators from China for the Berlin police. We cannot speculate where this report originated." There is an acute shortage of face masks and surgical gear in the US which is battling the surge in corona positive cases.

The US neared 3 lakh positive cases on Saturday as officials scrambled for protective medical gear. The death toll crossed 7,000, most being reported from New York City.

Canadian Prime Minister Justin Trudeau said this week: "We understand that the needs in the US are very extensive, but it's the same in Canada, so we have to work together." French leaders have also accused the US of buying up medical protective gear including face masks in China that had been meant for France.