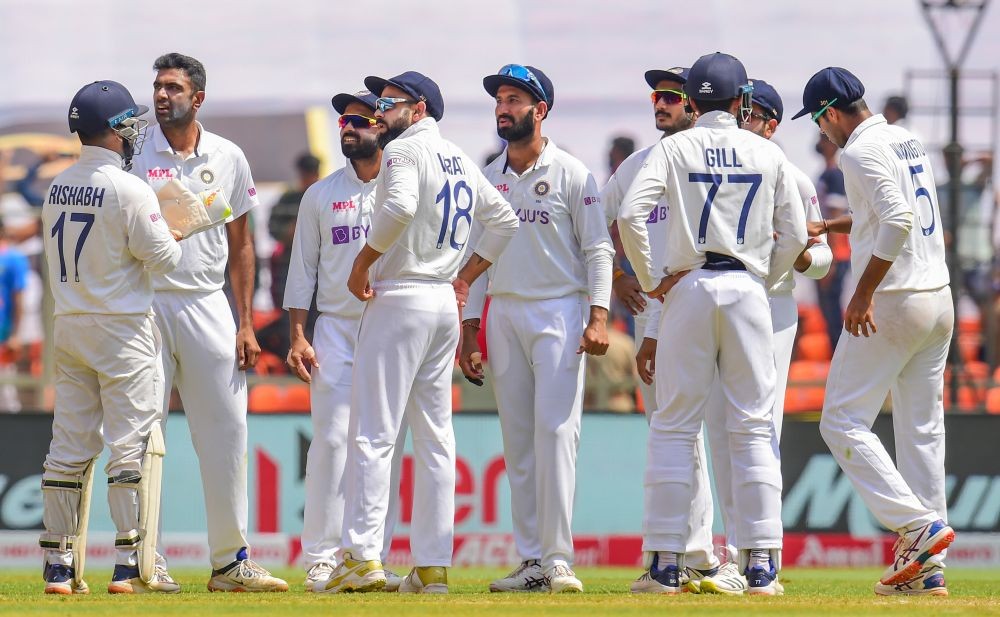 Ahmedabad: Indian cricketers celebrate the dismissal of a England batsman during the third day of the 4th and last cricket test match between India and England, at the Narendra Modi Stadium in Ahmedabad, Saturday, March 6, 2021. (PTI Photo/Kamal Kishore)(PTI03_06_2021_000051B)
Sports
6th March 2021

The result ensured India won the series 3-1, coming back remarkably after losing the first Test.

After Rishabh Pant had tilted the scales in favour of the hosts with an awesome century on Friday, Washington Sundar (96 not out) and Axar Patel (43) rubbed it in further, staying at the crease for one-and-a-half hour that blew away whatever hopes England had of making a comeback on Friday evening.

The two batted for 91 minutes on Saturday morning and frustrated England for 20.4 overs to take the game further away as India finished on 365, which was 160 runs ahead of the visiting side.

The lead was too much for England, who had to face 67 overs on the third day. And they succumbed under pressure even though the surface didn't play as many tricks as the ones during the previous two Test matches.

Between lunch and tea, India picked six wickets - three each by R. Ashwin and Axar Patel as England, starting the post-lunch session at six without loss, went to tea at 91 for six.

Their captain and batting mainstay Joe Root, who has failed to get even one fifty after his double century in the first Test, was also dismissed in the second session for 30 and with his dismissal, England's hopes of making a match dissipated into thin air.

To the Indian bowlers' credit, they maintained a tight line, not giving any room as England tried their best to get away but just couldn't find any shot or area to score runs consistently.

"I thought on this pitch - unlike the previous two pitches - you had to vary your pace a bit to get wickets," said Patel after the match.

By the time the day meandered to an end and the shadows lengthened it was only the little-known Daniel Lawrence who was giving a tutorial to the other England players on how to play spin. After his 46 in the first innings, he made 50 -- his half-century coming off 93 balls, in the second, trying to give England some consolation of making India bat again. With no support he failed.

Result: India won by an innings and 25 runs