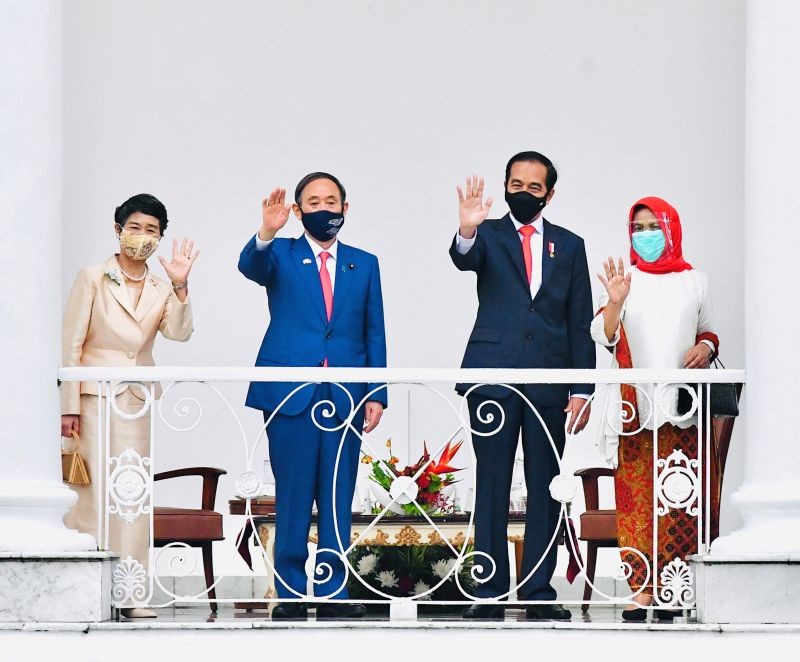 JAKARTA, October 20 (Reuters): Japan and Indonesia agreed on Tuesday to speed up talks on the export of Japanese defence gear and technology to Indonesia and to have their defence and foreign ministers meet soon, reflecting concern over China's regional assertiveness.

Japanese Prime Minister Yoshihide Suga is on a four-day trip to Vietnam and Indonesia, his first since taking office last month, and part of Tokyo's effort to strengthen ties with the two key countries in Southeast Asia.

"To further advance security and defence cooperation between the two countries amid the changing regional situation, we've agreed to hold a meeting of foreign and defence ministers at an early date and to accelerate talks over the transfer of defence equipment and technology," Suga said after discussions with Indonesian President Joko Widodo at Bogor palace near Jakarta.

The Indonesian leader, widely known as Jokowi, said during a joint media appearance that a stronger partnership between Tokyo and Jakarta was vital "especially amid increasingly glaring rivalry between world's big powers," an apparent reference to an intensifying confrontation between United States and China.

Suga and his Vietnamese counterpart Nguyen Xuan Phuc agreed in principle on a military equipment and technology export pact on Monday.

Suga must balance Japan's deep economic ties with China with security concerns, including Beijing’s growing push to assert claims over disputed East China Sea isles. Some in his ruling party want to see a harder line, after ties warmed under Abe.

Like other members of ASEAN (the Association of Southeast Asian Nations), Indonesia is wary of alienating big economic partner China and getting entangled in an intense confrontation between Washington and Beijing.

Indonesia is not a formal claimant in the strategically vital South China Sea, but considers a portion of the waterway its own. It has regularly repelled Chinese coast guard vessels and fishing boats from an area that Beijing says it has a historic claim to.

But Jakarta this year rejected a proposal by the United States to allow its P-8 Poseidon maritime surveillance planes to land and refuel there, a sign Jakarta does not want to take sides in the U.S.-China confrontation.

Suga’s Southeast Asia trip follows a meeting in Tokyo this month of the “Quad”, an informal grouping of India, Australia, Japan and the United States.

On Monday, Quad members said Australia would join naval exercises in the Bay of Bengal next month involving the United States, Japan and India, in a move that could raise concerns in China, which has criticised similar drills as destabilising.

The United States has been pushing for deeper collaboration among Quad members as a bulwark against China's growing regional influence. China has denounced the grouping of the four democracies as an attempt to contain its development.

Suga’s visit coincides with Japan’s efforts to diversify its supply chains and reduce reliance on China by bringing production home or locating more in Southeast Asia.

Jokowi said he appreciated the increased investment by Japanese companies in Indonesia.

But a flagship reform package designed to cut red tape and boost foreign investment, while greeted by financial markets, has sparked widespread protests across Indonesia, where critics say it undermines labour rights and environmental protections.

Suga also announced that Japan would extend 50 billion yen in long-term, low interest loans to Indonesia, which has been hit hard by the coronavirus pandemic and suffers the highest number of infections and deaths in Southeast Asia.