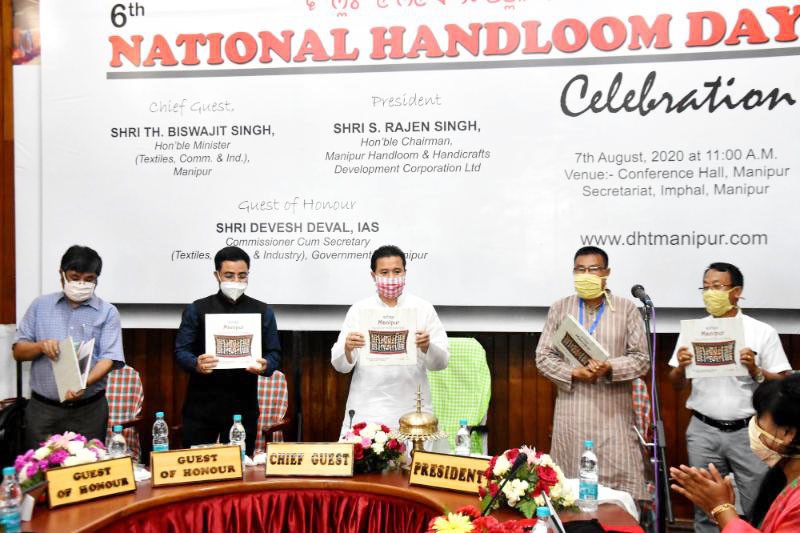 The Manipur Directorate of Handloom and Textiles celebrated the 6th National Handloom Day on Friday at the Conference Hall, Manipur Secretariat in Imphal .
North-East
7th August 2020

The Directorate of Handloom and Textiles celebrated the 6th National Handloom Day on Friday at the Conference Hall, Manipur Secretariat in Imphal with Textiles, Commerce and Industry minister Thongam Biswajit Singh as the chief guest.

According to an official statement, the National Handloom Day is being is celebrated in commemoration of the formal proclamation of the Swadeshi Movement and passage of the Boycott Resolution to boycott the Manchester cloth and Liverpool salt on August 7, 1905, in a massive meeting held in the Calcutta Town Hall.

The Ministry of Textiles considers this occasion as a symbolic date for celebration of the National Handloom Day, it said.
As part of the celebration the State Award for Handloom and Handicrafts were also distributed and a coffee table book on Manipur Handloom & Handicrafts as well as a guideline book for Exports of textile Materials were also released.

Addressing the celebration, Biswajit said that celebrating the day alone is not enough and that we should also understand the essence of the day being celebrated. The main objective of this celebration is to create awareness on handloom, its importance, usage and the employment generation, he said.

The Minister also said that the Directorate of Handloom and Textiles has already introduced a Buy Back Scheme for weavers through which weavers can contact the directorate through a toll free number and receive yarn at cheaper rates. The scheme also has a buy back provision for the finished products, he informed.

Biswajit also said that the coffee table book released as part of the celebration showcases the beauty of the state by highlighting the traditions, culture, handloom and handicraft products of various ethnic groups of the State.

The coffee table book published in association with the Indian Express Group has photographs with brief history on traditional dresses and costumes of different communities of the State.

In his speech, Manipur Handloom and Handicrafts Development Corporation Ltd Chairman, S Rajen Singh said the day is being observed throughout the country since 2015 with the main aim to promote our own products.

The celebration of the National Handloom Day will promote our weavers, artisans and craftsmen, he said adding that "we can achieve a self-sufficient society only when we promote and start using our own products".

Under the Scheme for Awardees, financial assistance at Rs 4.40 lakh each were also distributed to two state awardees of 2018-19.