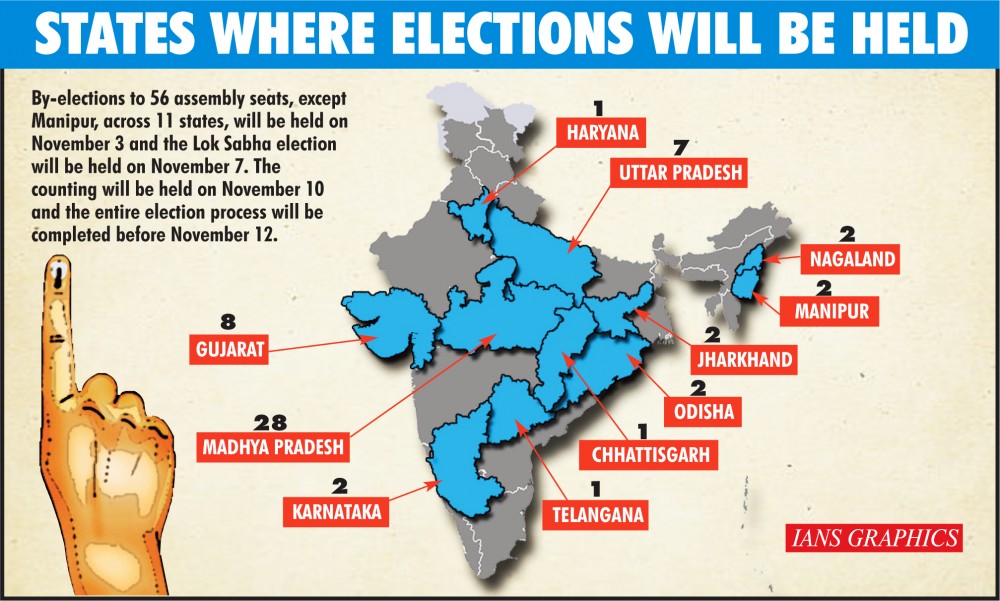 The Election Commission of India (ECI) on September 29 announced bye-elections to 56 assembly seats and one Lok Sabha seat in Bihar in the first week of November. (IANS Graphic)
Nagaland
29th September 2020

The bye-elections to 14 Southern Angami-I and 60 Pungro Kiphire Assembly Constituencies in Nagaland will he held on November 3, the Election Commission of India (ECI) announced on Tuesday.

According to ECI, the bye-elections to 56 assembly seats and one Lok Sabha seat in Bihar will be held on November 3 and 7 fill the casual vacancies in these Assemblies and Parliamentary Constituencies.

In Nagaland, the bye-elections to Assembly Constituencies have been necessitated with the demises of the incumbent legislators from the respective constituencies.

The 14 Southern Angami-1 was represented by Late Vikho-o Yhoshü, the former Nagaland Assembly, who passed away on December 30, 2019 in Mumbai. He was Nationalist Democratic Progressive Party (NDPP) candidate.

The 60 Pungro Kiphire AC was represented by Late T Torechu of Naga People’s Front, He died on December 16, 2019 in Dimapur.

The counting will be held on November 10 and the entire election process will be completed before November 12, the Commission said.

One Parliamentary constituency in Bihar and two assembly seats from Manipur go to polls on November 7.

The ECI decided not to hold bye-elections to seven constituencies in four states and would be held early next year.