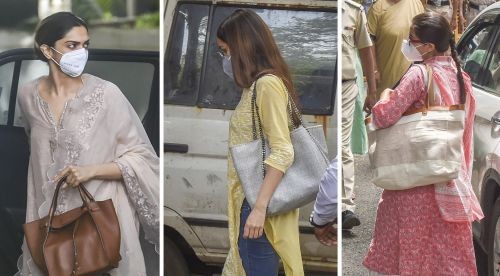 More than 18 people have been arrested so far by the NCB in connection with the Bollywood drug case, Mutha Ashok Jain, Deputy DG, South-Western Region of NCB said on Saturday.

The statements of Karishma Prakash, Sara Ali Khan, Deepika Padukone and Shraddha Kapoor have been recorded, he said.

"The statements of Karishma Prakash, Sara Ali Khan, Deepika Padukone and Shraddha Kapoor have been recorded. Kshitij Prasad has been placed under arrested after questioning. No fresh summon has been issued today. We have arrested more than 18 people," Jain said.

The NCB had launched an investigation into the drugs case after it received official communication from the Enforcement Directorate (ED), which was investigating the money trail related to actor Sushant Singh Rajput's death case. In the investigation, many revelations surfaced including various chats related to drug consumption, procurement, usage and transportation.

The ED had on July 31 registered an Enforcement Case Information Report in the late actor's death case after an FIR was filed by Rajput's father K K Singh against Rhea Chakraborty in Bihar on July 28.

Rajput was found dead at his Mumbai residence on June 14.