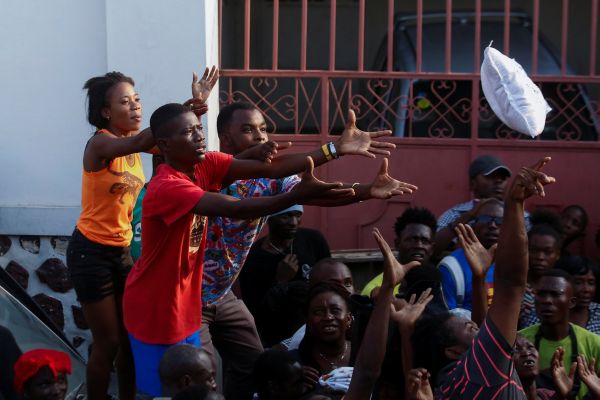 People reach for a bag of food thrown from a truck at a distribution run by a Haitian government program amid the spread of the coronavirus disease (COVID-19), in Port-au-Prince, Haiti on April 6, 2020. (REUTERS File Photo)

Small island developing states, such as Jamaica and Haiti, are among the most at risk economically due to their reliance on remittances, tourism and aid, UNDP found, despite the fact they have recorded only a handful of deaths from coronavirus.

"This may ruin the development achievements that some of these countries had over the last 30 years," Kovacevic said.

The global economy is collapsing at a pace not seen since World War Two, with many countries under lockdowns to curb the spread of an outbreak which has infected some 3 million people.

As governments and central banks scramble to provide unprecedented support to combat recession and unemployment, there are concerns over developing countries' limited firepower to fund health and economic rescue efforts.

This does not mean that the poorest countries will suffer most. More important than income level are health and education systems, inequality and social services, according to UNDP.

Inequality in developed countries is often associated with weaker social cohesion and lower trust in government, which could make it harder to beat the disease, said Kovacevic, while more than 40% of the world's people have no social safety net.

One of the most important factors that may be overlooked is connectivity, since internet access determines whether people can continue their education and jobs at home, Kovacevic said.

"The digital divide has become more significant than ever at this moment," he told the Thomson Reuters Foundation.

Some 6.5 billion people - 86% of the global population - do not have access to reliable broadband internet, UNDP said.

Croatia also emerged as another unexpected result. While it is well-prepared based on health and development measures, 20% of its gross domestic product (GDP) comes from tourism, which means it could be hard hit by travel bans and lockdowns.

Experts have warned that the 2030 deadline to meet the U.N.'s development goals is at risk as economies suffer in the fight against the virus, public financing dries up and international cooperation wanes.