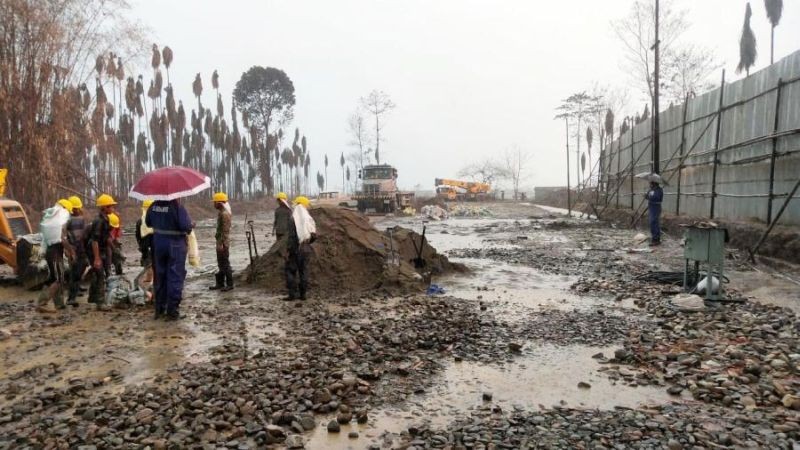 Heavy rain and subsequent flood has been hindering operations to put out the fire and cap a leaking oil well in eastern Assam's Baghjan. (IANS Photo)
North-East
29th June 2020

Natural gas from Oil India Limited's (OIL) oil well had begun leaking more than a month ago whereas it caught fire three weeks ago. Since then, efforts are on to cap the well.

OIL officials said that heavy rain in nearly a week in Baghjan in Tinsukia district had inundated the area in floodwater, including all connecting roads to the spot.

"Bridges have been damaged. At many places, knee- to waist-high rainwater is flowing over the road. OIL's operational areas are heavily inundated," an OIL release said.

A massive fire broke out on June 9 at OIL's Baghjan oil well near the Dibru-Saikhowa National Park, that had been spewing natural gas and oil condensates uncontrollably since May 27.

OIL official said that despite partial withdrawal of agitation by locals, youth organisations and others continue to agitate for higher compensation even as state-owned OIL continues to lose production of oil and gas.

So far, since May 27, over 8,922 MT of crude oil and around 11.50 million standard cubic metres per day of natural gas has been lost as a section of agitators continue with their protests in at least five locations in Tinsukia district.

After the oil leak and fire, a section of local people and various student organisations had forced OIL to stop its operations at many drilling locations and work-over locations in Tinsukia and Dibrugarh districts.

Though a section of agitators discontinued protest and road blockade last week, others continue to demand higher compensation for the affected people and holding OIL responsible for the mishap. OIL has so far provided Rs 30,000 to each of the affected families.

The experts from the USA and Canada associated with Singapore-based M/S ALERT, firefighters, NDRF and engineers on Monday continue their efforts to douse the oil well fire despite the rains and floods.

Besides inclement weather, OIL has been facing numerous other problems to put out the fire and cap gas leak at Baghjan, around 550 km east of Assam's main city of Guwahati.

In the meantime, the Army has built a 150-metre bridge over a water body to facilitate technical works to control gas leak and oil well fire, following request from Tinsukia Deputy Commissioner Bhaskar Pegu. Around 7,000 people have been evacuated and sheltered in 14 relief camps as the fire damaged over 35 houses and various other properties.

Local people said the fire had left a trail of devastation in the adjoining areas, including a famous lake. Farms with standing crops as well as ponds and wetlands in the adjoining villages have also been affected.

Various NGOs and government bodies, including Tata Energy Research Institute, have been conducting environmental and pollution studies in view of the fire and blowout of natural gas and oil condensates.

The TERI is also arranging drone-fly cameras for aerial photography and videography of affected areas and surveys are being carried out depending on weather conditions.