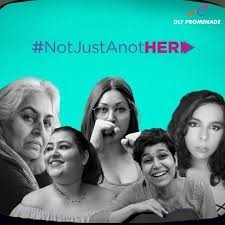 New Delhi, March 6 (IANSlife) In celebration of International Women's Day, DLF Promenade, salutes all women with the launch of its latest campaign. Titled #NotJustAnotHER wishes to celebrate every woman out there and cherish her inspiring story. The brand aims to create a safe platform wherein stories of courage and determination are told and shared.

Fostering equality, diversity and inclusiveness through its policies and practices, the brand aims to take it up a notch, engaging with five incredibly inspiring women who broke the glass ceiling by being true to themselves. These tell their life's story with a boldly-styled fashion photo shoot that resonates with women and reveals their enigmatic selves. The idea is to celebrate womanhood fearlessly.

The campaign entails a theme-based photo shoot with these women who challenged the status quo, and rebuilt their lives. The photo shoot with their fearless stories will be featured on DLF Promenade's social media handles, i.e., Facebook and Instagram to inspire and prosper all.

The campaign features, Sapna Dutta, a 64-year-old cancer survivor who has always lived on her own terms. Her idea of living a fulfilling life has always been to fight and never give up, taking up acting and modelling at the age of 55.

Prabsharan Kaur, who wishes to shatter the stereotypes of women being the weaker gender. A Krav Maga learner and teacher for the past 8 years, she now runs a foundation by the name of Nirbhau Naari Suraksha Foundation for training women in self-defense.

Sonal, who urges people to love themselves enough and then some more. All her life she had felt insecure about her size and wished to stay behind the camera, but it was when she molded her courage into confidence that she felt the immense joy in being who she is.

Sabika, a poet and a mental health advocate who was once diagnosed with codependency at the peak of her career runs her own support group to help people talk about mental health. Her journey is no less than of a superwoman who made her way from self-exploring thoughts to help make life easier for herself and others.

Taksh, an LGBTQ icon and equal rights supporter is an absolute brave-heart who finds power in her femininity, and channels that power to fight redundant stereotypes. She has embraced her true self even when her loved ones did not accept her reality. She is a woman who not only represents strength but also self-acceptance.

With this campaign, DLF Promenade aims to start a fashion digi-verse wherein women speak louder through their bold choices. The clothes and the styling are to help bring out their true personalities and narrate their stories in a visually captive manner. The brand promises to continue to spread such messages of inspiration to its audiences in future.