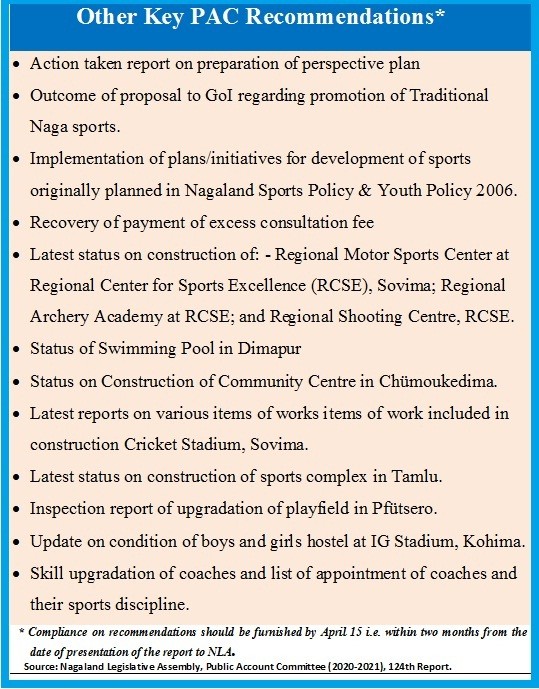 The NLA’s Public Account Committee (PAC) 2020-2021 of the Nagaland Legislative Assembly (NLA) has in its recent report pulled up the Department of Youth Resources and Sports (DYRS), among others, for its failure to review sports policy, infrastructure anomalies and lack of development plan for sports and youth activities.

The PAC headed by Advisor K Tokugha Sukhalu, which presented the 123rd Report to the NLA on February 15 also said that a “revised Nagaland Sports Policy 2006 should be furnished within the 2 (two) months” from the date of its presentation.

The observations were made while examining matters related the Comptroller & Auditor General (CAG) of India for the year 2014-2015 ‘Audit Report on Social, Economic, Revenue and General Sectors,’ first submitted to NLA on March 18, 2016.

CAG findings
The question of Sports Policy noted that at least three instances by the PAC while examining the CAG Report -  annual action plan for sports activities; appointment of talented youth and sportspersons in the State; and procurement of sports equipments.

“The Sports Policy of 2006 was not reviewed as per potential, popularity and performance of local sportspersons in various games as of June 2015,” the CAG had then noted.

It further pointed out that road shows and talent search programmes were not conducted during 2010-15 while inter-school and inter-college/university competitions were not introduced at the State/district level to integrate sports with the education curriculum.

Surveys were not carried out to identify the gap in infrastructure, manpower, sports equipment, sports and youth activities in the State, it added.

During the evidence hearing, the PAC inquired for the reasons behind the audit findings.

Department responses
According to PAC, during the hearing, the DYRS informed that a committee constituted in 2014 for reviewing the Sports Policy 2006 had submitted a draft alongwith another prepared by the Department.

As there were two drafts, the Department is taking time to review the policy, it said.

Road shows and talent search programmes were not conducted due to “scarcity of funds,” the Department submitted, adding that in 2016, the DYRS has sent a proposal to Government of India for fund allocation, which is yet to be received.

It also informed the Committee about the creation of a portal in line Union Sports Ministry wherein “talented youth can send their video clippings” and selected candidate are sent to the nearest SAI centre for further upgradation of talent.

Regarding gap in infrastructure and so on, it replied that for purchase of sports equipment, the Government sanctions only Rs 2 lakh per year for 24 disciplines which is “too less even to meet the requirement of one.”

“With the launching of Khelo India in April 2016 by the Government of India, the Department is preparing to conduct Block, District and State Level within the current year,” while Inter School/College/University competition are being taken up by respective department, it stated in a written reply.

It must be mentioned here that a two-day long State level ‘Khelo India’ was held in January 2017 while some block and district competitions were held thereafter.

PAC’s observation/recommendation
In its observation, the PAC noted that the DYRS is not following review of sports policy every 2 years as stipulated and reminded that this should be its “top priority.”

“The Committee is also of the considered opinion that the Department has not acted with due sense of responsibility,” it said.

There is no justification in creating a portal for youth when it is “clear” that youths are still lagging behind in the usages of these websites, it added, calling for creating more road shows and talent search within the community.

On procurement of sports equipments, observing purchase of “inferior quality,” the Committee recommended that thorough assessment of sports goods should be carried out in consultation with SSC/NOA before procurement.

It further recommended the Department to report on decision taken to revise the Sports Policy 2006.

Regarding the appointment of talented youth and sportspersons in DYRS, the Committee recommended a suitable amendment to the sports policy clearly specifying reservation for sports quota and certain polices to secure and protect the job of contractual employees.

Action taken to that effect should be updated to the Committee along with a revised policy, it said.

The compliance on all the recommendations, the PAC stated, “should be furnished” by April 15 i.e. within two months” from the date of presentation of the report to NLA.

It must be mentioned here that when the ruling People’s Democratic Alliance (PDA) assumed office in March 2018, the promotion of sports was touted to be one of its main thrust areas.  Apart from the sports policy “with 100 days in power,” even a Sports University was pledged in its Common Minimum Programme (CMP) released in May, 2018. The pledges are yet to be fulfilled.

•    Action taken report on preparation of perspective plan
•    Outcome of proposal to GoI regarding promotion of Traditional Naga sports
•    Implementation of plans/initiatives for development of sports originally planned in Nagaland Sports Policy & Youth Policy 2006
•    Recovery of payment of excess consultation fee
•    Latest status on construction of:- Regional Motor Sports Center at Regional Center for Sports Excellence (RCSE), Sovima; Regional Archery Academy at RCSE;  and Regional Shooting Centre, RCSE.
•    Status of Swimming Pool in Dimapur
•    Status on Construction of Community Centre in Chümoukedima
•    Latest reports on various items of works items of work included in construction Cricket Stadium, Sovima
•    Latest status on construction of sports complex in Tamlu
•    Inspection report of upgradation of playfield in Pfütsero
•    Update on condition of boys and girls hostel at IG Stadium, Kohima
•    Skill upgradation of coaches and list of appointment of coaches and their sports discipline
* Compliance on recommendations should be furnished by April 15 i.e. within two months from the date of presentation of the report to NLA. 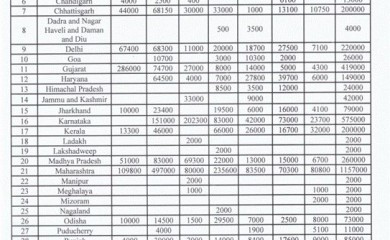