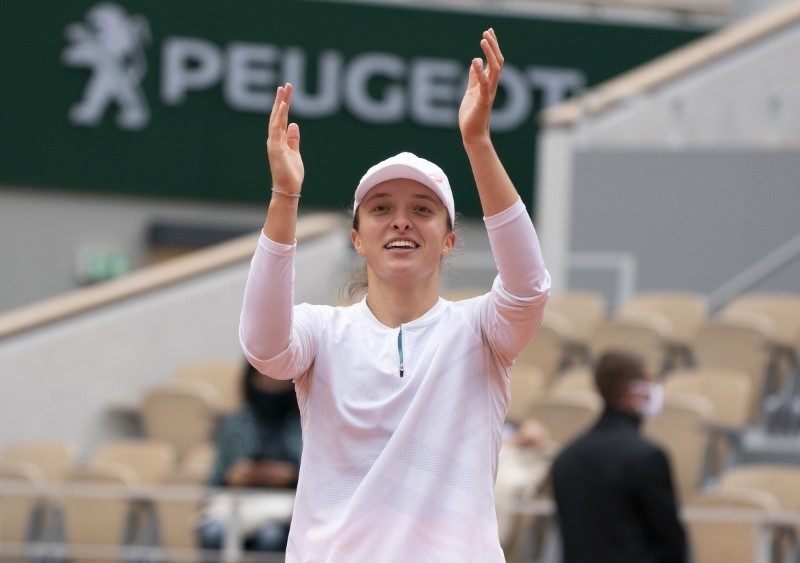 WARSAW, October 9 (Reuters): Iga Swiatek's incredible run to the French Open final has taken the tennis world by storm but her one person who is not surprised is her coach Piotr Sierzputowski.

The music-loving 19-year-old has dropped only 23 games en route to the final where she will face American Sofia Kenin who in February claimed the Australian Open crown.

If Swiatek prevails she will become the youngest player to lift the Suzanne Lenglen Cup since Monica Seles in 1992.

"It's not like she got to where she is by chance," Sierzputowski told Reuters.

"She may be 19, but she has been working on this for a very long time quite rigorously and she been making stable progress for many years."

While her coach described Swiatek as "a beast" on court earlier this week after she destroyed top seed Simona Halep in the fourth round, he says off the court she is just a regular teenager, studying and listening to music.

He even said this week she finds practise sessions boring, but it is her normality that allows her to play so freely on the court in big matches.

"She listens to the likes of Guns N' Roses and we even went to a Florence and the Machine concert during a trip to play the Australian Open," Sierzputowski said.

Swiatek is the first Polish woman to reach the Roland Garros final in 81 years and the first at any major since Agnieszka Radwanska at Wimbledon eight years ago.

Sierzputowski acknowledged that Saturday's final is the chance of a lifetime, but said Swiatek's preparation will be exactly the same as for every match she plays.

"We will prepare as we would for any match. De facto, we won't do anything differently that we haven't done up until this point," he said, which includes a morning warm-up, then a chat about tactics, then another warm-up before hitting the court.

While Swiatek, who was ranked 54th in the world when she arrived in Paris but is now on the verge of the top-20, has brushed aside opponents with ease so far on the red clay, Sierzputowski said she will be ready for a battle with Kenin.

"The scoreline doesn't make any difference, it's more important if she will win or lose the final," he said.