Task Force for Music and Arts (TaFMA) has taken another positive step to uplift the spirits of people during this time of crisis and isolation by initiating the TaFMA COVID-19 Pandemic Virtual Art Exhibition in collaboration with Neu Naga Foundation for the Arts (NNFFTA). The exhibition will digitally showcase artworks by 62 artists from across the world including works from countries like India, Russia, Greece, and Germany, carrying voices of people during this difficult time.

Earlier, TaFMA and NNFFTA had called for entries for the virtual art exhibition and besides a set of submission guidelines, also stated that the exhibition is not for profit but a show aimed at inspiring both artists and non-artists. Out of the 62 artists, whose works have been received, there are a total of 24 Naga artists, and nationally, includes artworks by artists from the states of Ahmedabad, Kolkata, Maharashtra, Delhi, Kerala, Orissa, Assam, Sikkim, Meghalaya, Mizoram and Manipur.

“We believe artists reflect and are able to capture in colour and form what general people are going through at this time”, Theja Meru, Advisor to TaFMA put across. He asserted that the role of artists, musicians and other art forms are of utmost importance especially during this time while highlighting that “we have had dances, music, and art can definitely play a big role in spreading the message of hope and positivity.”

The virtual art exhibition is based on the theme of “COVID-19” which will see what the pandemic evokes in their spirits and what works artists can come up with on the subject. “We want to see what type of imagery they can come up with, what they are going through at this time”, he stated while enunciating further that “it’s like a self-expression of what the artists are also going through, and hopefully their works can find some connection with the larger public.”

When things get better and the lockdown is lifted, he highlighted that TaFMA will do a digital exhibition at the Regional Centre of Excellence for Music & Performing Arts (RCEMPA), which will run for one month. During this period, the artworks will be projected on the wall for people to come and see what they were going through or what they were feeling during the pandemic lockdown.

Further, in honour and respect of all those who lost their lives and those who worked tirelessly in the frontlines to save precious lives, TaFMA will later bring out a hardbound book featuring all the artworks being exhibited at the Virtual Art Exhibition. He further acknowledged Neu Foundation for the Arts in putting together the virtual art exhibition while expressing that it is absolutely not possible without their support. “They are doing the actual work”, he said.

Neu Naga Foundation for the Arts is a not-for-profit organization founded by a team of visual artists— Akup Buchem, Throngkiuba Yimchunger, Cynthia Kolakhe and Mhasiselhu Viyie solely to promote art. NNFFTA believes that an art exhibition such as this is necessary during a time like this and that art can give us peace, calm and self-reflections.
The art gallery can be viewed in the TaFMA YouTube Channel. 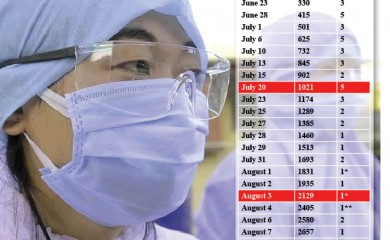