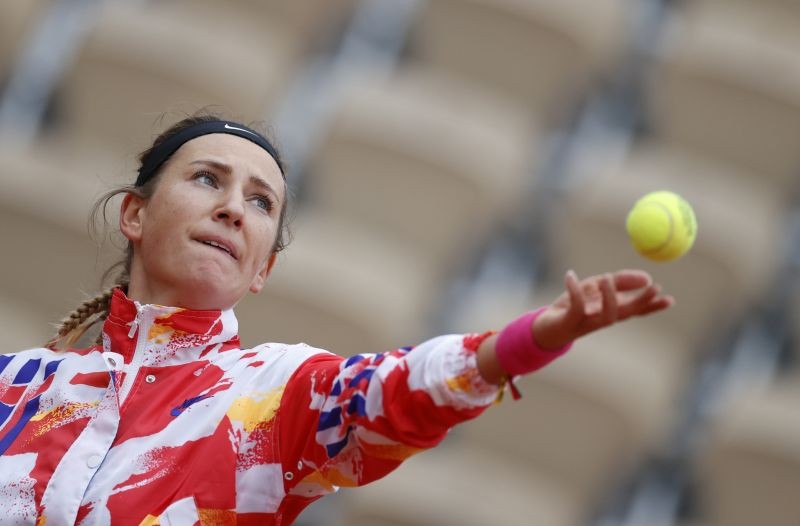 PARIS, September 27 (Reuters): Former world number one Victoria Azarenka complained about the playing conditions at the French Open amid light drizzle and low temperatures during her 6-1 6-2 first-round victory on Sunday.

The U.S. Open runner-up, who entered court Suzanne Lenglen wearing a thick pink puffer jacket, and her opponent Danka Kovinic walked off the court after play was suspended with Belarusian Azarenka leading 2-1.

"No, it's eight degrees, I live in Florida, I'm used to hot weather," a furious Azarenka told the supervisor who asked her to wait on court until a decision was made on whether the match should continue.

Speaking to her opponent from Montenegro, 10th seed Azarenka, who next faces either Venus Williams or Slovakia's Anna Karolina Schmiedlova, said: "Do you want to wait on court?

"No, it's ridiculous, it's too cold. What's the point? Sitting here like ducks," said Azarenka, who wore a wind jacket on court and said she was worried about sliding on a court made heavier by the persistent drizzle.

The players returned after a delay of about 50 minutes and Azarenka immediately broke her opponent's serve before wrapping up victory in front of nine spectators.

Azarenka said the interruption should have been better managed.

"I think it's very tricky at the moment to have these conditions. So definitely not going to sit here and complain, but sometimes I think there are smarter ways to handle situations.

"The unfortunate part sometimes with the French Open is that there is no communications with players or players council," she added.

The French Open is usually played in May-June but this year's tournament was pushed back to late September due to the COVID-19 pandemic.

The weather in Paris is therefore colder than normal for the Grand Slam event with the claycourt conditions much heavier and slower than the players are accustomed to.

Asked whether the tournament should have been cancelled altogether, like Wimbledon was, Azarenka said it was important for lower-ranked players.

"I wouldn't particularly say so because I do believe that I want to play," she said.

"We all want to compete and we want to play and for maybe not a player like me that maybe financially is more stable than other players are, it's very important to have this opportunity during the pandemic.

"I think that there should have been a little bit more consulting and heads up and conversation. I think that's where we can improve, for sure."