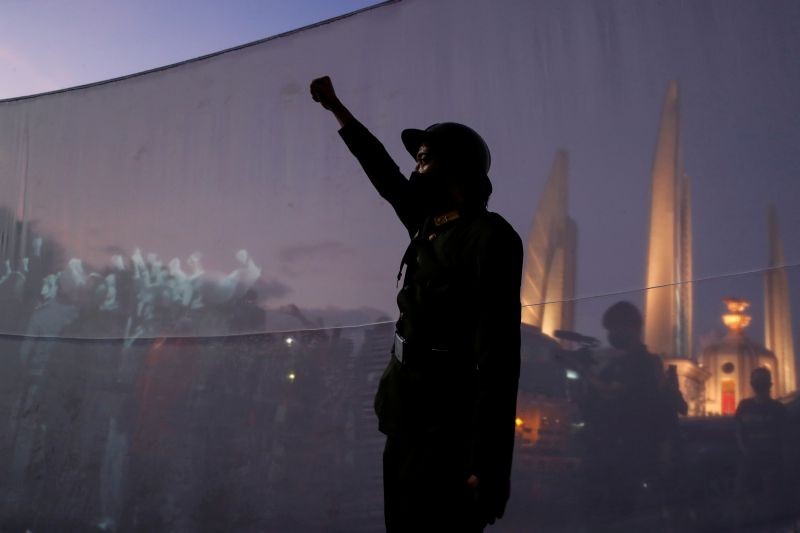 A demonstrator dressed with a vintage uniform raises his fist next to images of the 1932 coup in Thailand being projected on a white screen placed by protesters in front of the democracy monument as they demand a change in the constitution on the 88th anniversary of a revolt that ended the absolute monarchy in the country, in Bangkok, Thailand on June 24. (REUTERS Photo)
World
25th June 2020

BANGKOK, June 25 (Reuters): Thailand's army has joined the debate over history and democracy in the Southeast Asian nation by holding a ceremony on the same day that pro-democracy demonstrations were held at memorials to the 1932 revolution that ended centuries of absolute monarchy.

A military statement seen by Reuters on Thursday confirmed that army officials had honoured leaders of a failed 1933 insurrection known as Boworadet Rebellion in a ceremony inside the army headquarters in Bangkok.

The disputes over history come as more Thais are speaking out against a military-dominated political system and as monuments to the 1932 establishment of democracy, including the one celebrating victory over the Boworadet Rebellion, have been mysteriously removed from public spaces.

The military has cited protection of the monarchy as justification for staging coups in 2006 and in 2014. Having led the junta that replaced a democratically-elected government in 2014, former army chief Prayuth Chan-ocha remained prime minister following a disputed election last year.

Historians have commonly described the Boworadet Rebellion - named after a prince who led it - as an attempt to re-establish the absolute monarchy, but the army statement said that it was opposing "dictatorial" governance.

Officially a constitutional monarch, King Maha Vajiralongkorn is a powerful figure for whom the constitution commands reverence. Insulting the king is a crime punishable by up to 15 years in prison.

The army statement described the establishment of constitutional monarchy and parliament in 1932 as "a coup that toppled the monarchy".

"The courage and sacrifice of Prince Boworadet and Phraya Si Sitthisongkhram deserved to be praised for their role in protecting the monarchy with loyalty and for wanting the country to maintain a true democratic system," the statement said.

This alternative narrative is product of conservative forces who have been seeking since the late 1950s to recast the role of the king, according to some historians.

"This is an attempt by the army to create a new version of history," said Charnvit Kasetsiri, a prominent Thai historian.