The Champions League has become a thorn in Guardiola's side 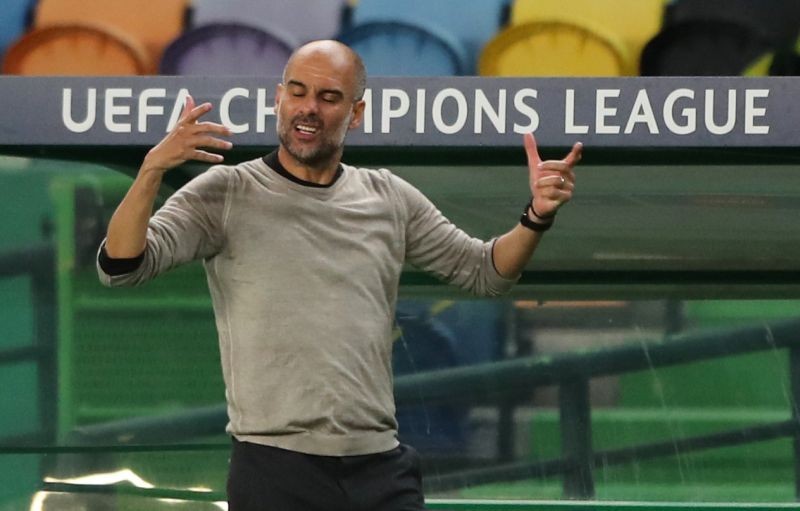 LISBON, August 16 (Reuters): With the millions they have invested in top players and with the most respected coach of his generation in charge, Manchester City should be doing much better than going out of the Champions League in the last eight.

But after their shock 3-1 defeat by Olympique Lyonnais on Saturday that is exactly what City have done in the last three years.

Guardiola was brought into the club, by their Abu Dhabi based owner Sheikh Mansour, after his predecessor as manager, Chilean Manuel Pellegrini had taken the club to the semi-finals of the Champions League, while also winning the Premier League title.

And while Guardiola has brought two Premier League titles, smashed records and produced some of the most glorious football the club's fans have ever seen -- European success remains elusive to his team.

Clearly it irritates the Spaniard greatly, indeed at times he appears almost obsessed with the competition.

Throughout this season, Guardiola has frequently referred to the Champions League, without prompting, when asked questions about the domestic campaign.

There is a noticeably different demeanour to Guardiola in the build-up to Champions League games, he is edgier, even in the group stage where he has a tendency to exaggerate the quality of relatively modest opponents.

The assumption had always been that City, as relative newcomers to the European elite, just needed to adjust to the different demands that the Champions League can place on a team.

"One day we will break this gap to the semis," he said after Saturday's loss.

"The team over last few years deserve it. Maybe one day we'll break this gap."

But now questions are being asked of Guardiola himself and surprisingly for a man considered to be a master tactician, of his team selection and formation.

City had looked a mature, top European team while beating 13-times winners Real Madrid home and away in the previous round.

But Guardiola changed the winning formula from that game, replacing the attacking midfielder Phil Foden with an extra defender in 19-year-old Eric Garcia.

It was an unexpected decision. Clearly Guardiola felt that he needed to neutralise a Lyon attack that can often take the form of a trident but it quickly became apparent that the move had handed the French side the initiative in midfield and City were unable to dominate in their usual manner.

When he belatedly took off defender Fernandinho for winger Riyad Mahrez, in the 56th minute, City's attacking threat increased significantly and 13 minutes later they drew level.

Guardiola's tactics don't explain how his side allowed a simple ball over the top to lead to Moussa Dembele's goal to make it 2-1, nor do they have anything to do with Raheem Sterling then missing an absolute sitter from close range.

The third goal came with City desperately chasing the match in search of a leveller but there still remains the question of whether Guardiola had simply over-complicated the team's task.

Former England winger Chris Waddle, who played in France with Olympique Marseille, reaching the final of the European Cup in 1991, had no doubts that Guardiola should have allowed City to play their normal way.

"They didn't trouble them enough, it needed a David Silva playing between the gaps. They wouldn't have liked playing against Phil Foden tonight," he said.

"Pep Guardiola has to put his hands up tonight and say I got it wrong."

Lyon coach Rudi Garcia added to the debate with his assertion that his team had "won the tactical battle".

But Guardiola was dismissive of that notion.

"In this competition the tactics are not the most important thing," Guardiola told a news conference.

"They (Lyon) are so fast and our central defenders are not so quick so I didn't want to leave them two versus two.

"We worked for three days on this, we discussed it and we reviewed this and when you play like we did in the last 20 minutes it shows the system is not the problem."

But the fact remains that a City team which beat Zinedine Zidane's Real were good enough to beat Lyon and didn't.

Working out exactly why, will be something that Guardiola is now likely to deeply ponder for many months.