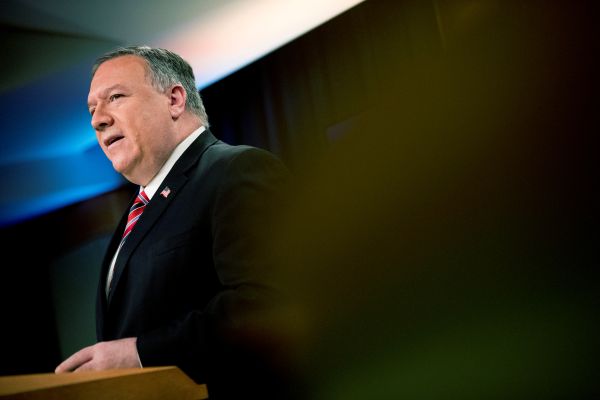 U.S. Secretary of State Mike Pompeo speaks at a news conference at the State Department, in Washington, US on April 29. (REUTERS Photo)

WASHINGTON, April 29 (Reuters): The United States will not allow Iran to purchase conventional arms after a U.N. prohibition on this expires in October, U.S. Secretary of State Mike Pompeo said on Wednesday.

"We’re not going to let that happen," Pompeo told reporters at a news briefing. "We will work with the U.N. Security Council to extend that prohibition on those arms sales and then in the event we can't get anyone else to act, the United States is evaluating every possibility about how we might do that."

The United States in 2018 withdrew from the Iran nuclear deal that sought to prevent Tehran from developing nuclear weapons in exchange for relief from economic sanctions. As part of that deal, a U.N. arms embargo on Iran expires in October.

A U.S.-drafted resolution to extend the embargo has been given to Britain, France and Germany, all parties to the nuclear deal, a U.S. official confirmed, but U.N. diplomats said it has not been shared with the remaining 11 U.N. Security Council members, including Russia and China. Russia and China, which hold vetoes on the council and are parties to the nuclear deal, are believed to be eager to sell armaments to Iran.

"The failures of the Iran nuclear deal are legion. One of them is now upon us. ... where China, Russia, and other countries from around the world can all sell significant conventional weapon systems to the Iranians in October, Pompeo said.

"We are urging our E3 partners to take action. This is within their capacity to do," he added, referring to Britain, France and Germany, each of which has the ability to force the "snapback" of all U.N. sanctions on Iran - including the conventional arms embargo - lifted under the nuclear deal.