Why fuel prices are higher in Nagaland than in Delhi? 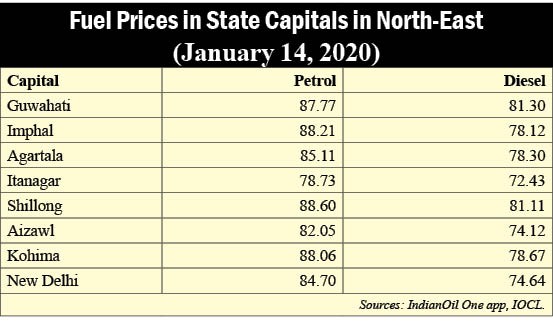 For the second consecutive days, fuel prices increased sharply by 25 paisa per litre across India, taking their retail prices to new record highs.

In Dimapur, the prices were marginally lower at Rs 87.09 and Rs 77.97 respectively for petrol and diesel, according to IndianOil ONE app. The app is maintained by Indian Oil Corporation Ltd for fuel related needs.

Incidentally, with this, fuel prices in Nagaland are among the highest in India, and even higher than the national capital, Delhi.

In Delhi, petrol was sold at Rs 84.70 a litre while diesel price increased to Rs 74.88 per litre on January 14. It was considered new record high level of prices.

At Rs 84.70 a litre in Delhi, petrol price has breached the highest level in the national capital after October 4, 2018, when the rate had risen to Rs 84 a litre, IANS news agency reported.

Comparative prices in NE
However, fuel prices in most North East States were higher than National capital except Itanager and Aizawl. (See table)
The prices were costliest in Shillong, with petrol selling at Rs 88.60 and diesel at 81.11. In Imphal, it was retailing at Rs 88.21 for petrol and Rs 78.12 for diesel.

In Guwahati, the going rates were Rs 87.77 and Rs 81.30 for petrol and diesel respectively.

Fuel prices were lowest in Arunachal Pradesh with petrol selling at Rs 78.73 and diesel at Rs 72.43.

It reflects the changed tax regulations, which the State Government dabble twice in 2020.  The first was the contentious COVID-19 cess of Rs 5 per litre on diesel and Rs 6 per litre on petrol and other motor spirits imposed on April 28, citing the financial crunch due to the lockdown associated with the COVID-19 outbreak. The cess was later revoked on September 23, 2020.

However, the State Government announced marginal fuel-tax hikes in November 2020 resulting in higher prices of nearly 3-4 rupees. The hikes, which came into effect from midnight of November 11, resulted in increase in petrol price by Rs 3.60 and diesel by Rs 2.76 per litre in Nagaland.

Why rates differ across states?
In India, prices of petrol and diesel are initially decided by the Oil Marketing Companies (OMCs) depending upon the global market. However, the retail cost differs across states due to tax regulations prevailing in the central tax, state and transportation cost.

As a result, nearly 50% of retail prices comprises of central and states taxes and the commission. Under the Constitution, the central government has the powers to tax the production of petroleum products, while states have the power to tax their sale tax, according to a PRS Research analysis. Petroleum has been kept outside the purview of the Goods and Services Tax (GST) so far.

Before 2014, the prices of fuel were regulated by the government. However the government deregulated the pricing of petrol in 2010 and diesel in 2014. Since then, OMCs revises and determine the price of these products on day to day basis.