1.2 MT of organic pineapples from Manipur flagged off

Manipur CM Biren Singh during the flag off of the organic Manipur pineapples which were airlifted for export on July 12.
North-East
12th July 2020

For the last three years the Manipur Organic Mission Agency (MOMA) has been exporting locally grown organic pineapples to different cities through air cargo. Out of the total targeted quantity of 220 MT set for this year, the first air shipment of 1.2 MT was flagged off by Chief Minister N Biren Singh in a function held at Bir Tikendrajit International Airport on Sunday.

Demand for locally grown organic pineapples has witnessed a steep rise in different cities in the past couple of years due to its unique taste and dedicated efforts from MOMA, the agency which comes under the Department of Horticulture and Social Conservation, Government of Manipur.

During 2018 and 2019, the agency exported a total of 250 MT of organic pineapples to cities like Delhi, Bangalore, Chandigarh, Mumbai etc. This year as well, it has been able to improve the quantity of export despite the persistent inconveniences given by pandemic COVID-19. A total of around 220 MT of queen variety of pineapples are to be airlifted in different phases to cities like, Delhi, Mumbai, Ludhiana (Chandigarh), etc. with assistance from a local private company known as Krooshi-Karma Naturals Pvt. Ltd. These pineapples were grown and produced under the Phase-II of Mission Organic Value Chain Development for the North East Region (MOVCDNER).

Speaking at the occasion, Singh, who also holds the Horticulture and Soil Conservation portfolio, said that farmers need not worry for the market to sell their produce now. Assuring that the Government would buy all their produce, the Chief Minister informed that a corpus fund of Rs 3 crore has been created for this purpose by the Government.

He observed that Manipur would become a self-sufficient and self-reliant State only when its agriculture and horticulture products are increased by giving thrust to these sectors. Mentioning about Prime Minister Narendra Modi’s popular slogan, ‘Vocal for Local’, the Chief Minister opined that the State needs to work hard to change and upgrade indigenous and local produce into the items of global standard. This would serve as a lucrative means for generating income for farmers and people of the State, he said and added that the Government would always extend all possible support and also award incentives to hard working farmers.

Responding to a query regarding price hike, the Chief Minister asked the shopkeepers to sell all the items as per the prices fixed by the Government. He said that the Government would be compelled to take action against the erring shopkeepers and traders if they continue to charge exorbitant prices from the people at this time of hardship. 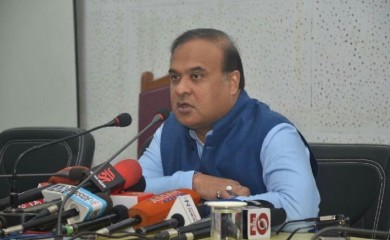