‘A tough battle we hope to win’ 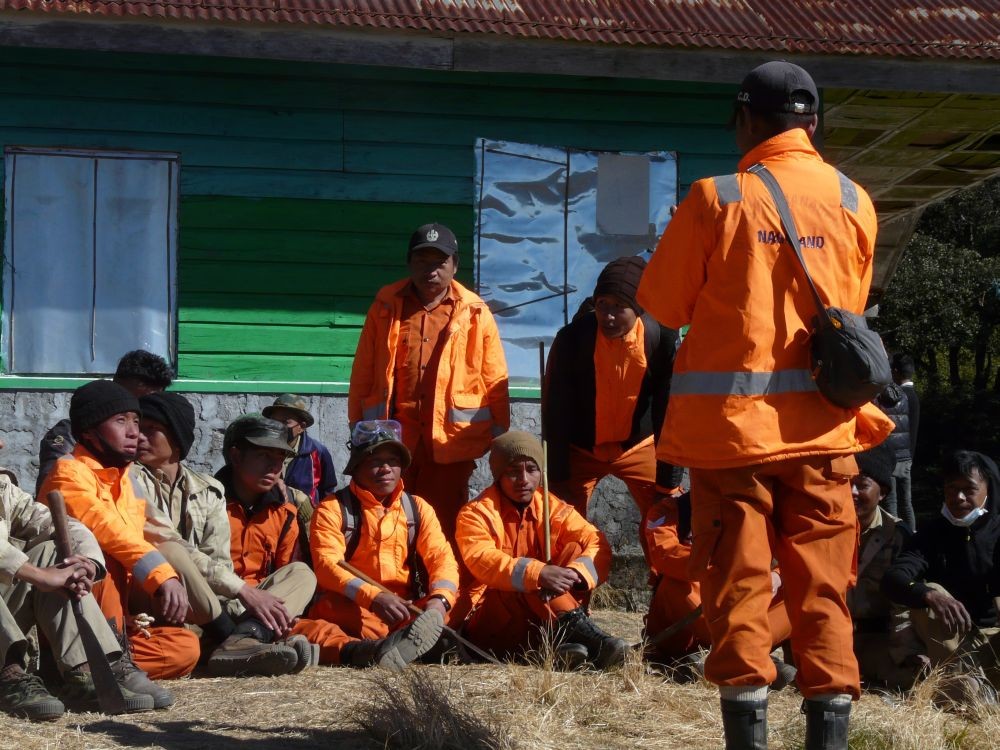 Firefighters and volunteers taking a break from the ongoing operations to douse the fire in Dzükou Valley area on January 7, nine days after it was first reported on December 29. (Photo Courtesy: Adolie Kere)
Morung Exclusive
7th January 2021

The pristine Dzükou valley has often relied heavily on volunteers/civilians to save her from the fire, wild or man-made.

Firefighting in the valley has been a shared responsibility of the community in the Southern Angami region, the Police, Administration, the SDRF and others. As operations continue to fight the fire raging in the valley, a few of them shared their narrative with The Morung Express on Thursday.

On December 31, Neisato Neihu, Client Operations Head at Infosys, woke up before dawn and climbed the valley to volunteer in the fire fighting. Neihu, whose family runs a small travel company in Kigwema called Native Stories has visited the valley several times with friends as well as clients. “This was the gloomiest entry. The charred mountains standing black greet you instead of the undulating waves of green,” he recalled.

“It is one of the most dreadful experiences ever. To see such a beautiful place burnt to the ground, it really shakes you to the core,” said 25-year old Adolie Kere, a SAYO volunteer and Dzükou Trek guide.

For the young trek guide, it has been the second time for him to witness the Dzükou fire. Although the last fire which occurred in 2018 was worse than the present fire, according to Kere, he added, “But we cannot say to what extent this fire will grow for now as it is still burning.”

SAYO volunteers stationed at the valley and Trek guides like Kere are usually the first responders in any emergency that occurs in the valley.

On December 31, Kere volunteered to help douse the fire along with the Nagaland Police and the Nagaland Disaster Management Authority.

“We had gone to douse the fire or at least bring it under control so the fire does not spread. We returned as the fire seemed to have been brought under control, but it began to burn again and spread to the surrounding forests. A few number of volunteers were deployed again the next day and till today people have been going up the valley and back doing their best to douse the fire,” Kere shared.

22-year old Avi Bio, a former caretaker of the Dzükou Resthouse has volunteered in two fire incidents in the Valley. For him, the present fire in Dzükou valley has been the longest. “We could not go near the fire so we had to clear the flammable vegetation from a distance to prevent the fire from advancing in the Valley. We only used Daos to clear the areas,” Bio recounted.

“The bamboos are very tough to cut. Every 20 minutes you need to run to the river to sharpen your dao again. The exhaustion is extreme,” Neihu added.

For those on the frontline fighting the fire, a major challenge is the vastness of the Valley. Zakieleto Tsükrü, President of Southern Angami Youth Organisation (SAYO) mentioned that it takes the volunteers (staying at the base camp) over three hours to reach the locations.

“They have to cross mountains and rough terrains and cliffs, and need local guides to guide them,” Tsükrü shared.

Essential commodities for the volunteers were airdropped yesterday, however there is still shortage so we are working on it, he added.

Besides the shortage of manpower and resources, another challenge according to Kere, is “the strong winds which enable the fire to spread quickly.”

“The terrain of the valley is like a wind tunnel and the winds are really strong. The extreme weather conditions make it hard on us too,” Kere added.

As the fire in the valley rages for the tenth day, Neihu reminded that some of the volunteers have been camping at the Valley ever since the fire began. “Everyone needs to step up to volunteer when this happens and let us be grateful to the people fighting this fire,” Neihu said.

“It is really a tough battle for us but we hope to win it,” Kere concluded.

As firefighting operations in the Dzükou Valley area continued for the ninth day, it was reported that strong winds in the valley worsened the wildfire on Thursday.

Fire fighting teams took the help of volunteers familiar with the area to find alternative trekking routes to the affected areas bypassing the steep terrain, as reported by The Telegraph.

Meanwhile, officials assured that the fire is still raging, “but the situation is under control”.

Around 130 personnel camped at the site the previous night.

“The fire intensified yesterday. In one location, the fire was advancing to the valley. However the ground operation teams were able to contain the fire. The fire is still spreading towards North,” the DFO said.

At the time of filing this report, no active fire was reported from the base camp. However, the DFO reminded that ground fires like the present one are difficult to ascertain since ground fires may be present but not appear on the surface.

“We are also getting updates from the National Remote Sensing Centre about the active fire locations. That is also helping the ground team,” added Rajkumar.

An emergency District Disaster Management Authority (DDMA) meeting was convened under the chairmanship of Deputy Commissioner (DC) and Chairman DDMA Kohima, Mohammed Ali Shihab A in his office on Thursday.

The DC informed that the fire on Southern side, which has been descending was physically doused off by the ground team and the fire was under control at the time of reporting. The team stationed at Base camp in the Valley will monitor the fire situation and plan for the next day’s operation accordingly, as per a DIPR report..

Meanwhile, the PRO Defence, Kohima informed that 4 helicopters of the Indian Air Force (IAF) would continue missions to assist in the fire fighting operations on January 8.