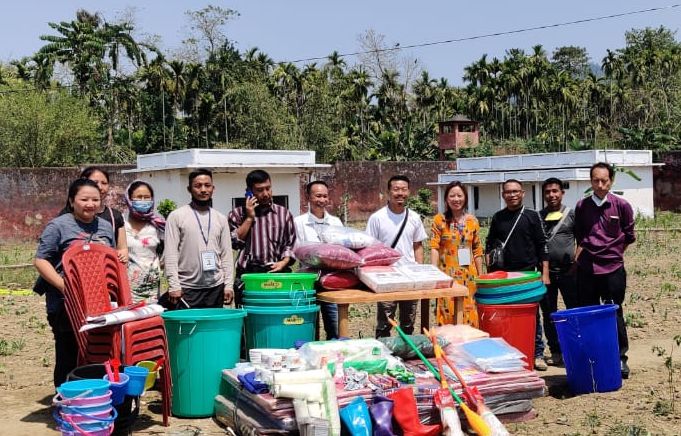 Items collected for using at the quarantine centre in Naginimora. (Photo By Special Arrangement)

When COVID-19 was declared a pandemic by the WHO, governments all over the world set out to prepare for the worst. In Nagaland, despite repeated assurance from the government, there are still places where even basic medical facilities are missing.

With only one Primary Health Centre (PHC) in Naginimora in Mon district, concerns about the preparedness of the town in case of an outbreak was highlighted in a meeting between the Additional Deputy Commissioner (ADC) and Konyak Union (KU) Naginimora members. Subsequently, they decided to convert the abandoned sub-jail building in Naginimora into a quarantine centre.

However, the sub-jail had been abandoned for more than a decade, and renovating the building was no child’s play. As a result, they were unable to proceed with the works, owing to shortage of funds.

That was when office bearers of the Konyak Union (KU), Naginimora- Nyeiang Konyak, Khampei Konyak and Pangjei Konyak, contributed their pocket money in order to initiate the work.

According to Nyeiang, the only PHC in the town is also being operated from the doctor’s quarters. “The District Hospital is too far from our place and the PHC will not be enough in case there is an outbreak,” he told The Morung Express.

The town shares the border with Bihubar in Assam and is located more than 70 kilometres away from Mon town where the district hospital is located. Due to bad road conditions, it takes more than four hours, sometimes even five hours to reach Mon town, he revealed.

With nothing but their pocket money in hand, the trio along with other KU Naginimora members and youths got down to work. Along with assistance from the ADC, they also started receiving donations from well wishers including the various churches in the town and other civil organisations.

The youths worked in batches to complete the unit.

“We also have to maintain social distancing so we could not employ many people at once,” Nyeiang said. The construction and electrical fitting works were done by daily wage labourers and water supply for the centre was sourced from the nearby river.

After more than two weeks of cleaning, renovating and sanitizing, the quarantine centre was completed on April 3. It was handed over to the Chief Medical Officer (CMO), Mon and his team on April 4. CMO office Mon has provided all the medical equipment and PPEs required at the quarantine centre and it is ready for use any time the need arises.

The quarantine centre has 13 beds and three rooms have been renovated, Nyeiang said.

In case of an outbreak, our town does not have the medical facility to cope immediately, and so this is our way of helping our society prepare in case of such a misfortune, he said.

Highlighting that this was no individual feat, he expressed gratitude for the help and support from people from various walks of life.

“So many people have contributed in making this initiative a success, and though we cannot mention everyone individually, we have all worked together to make our town safe”, Nyeiang said.