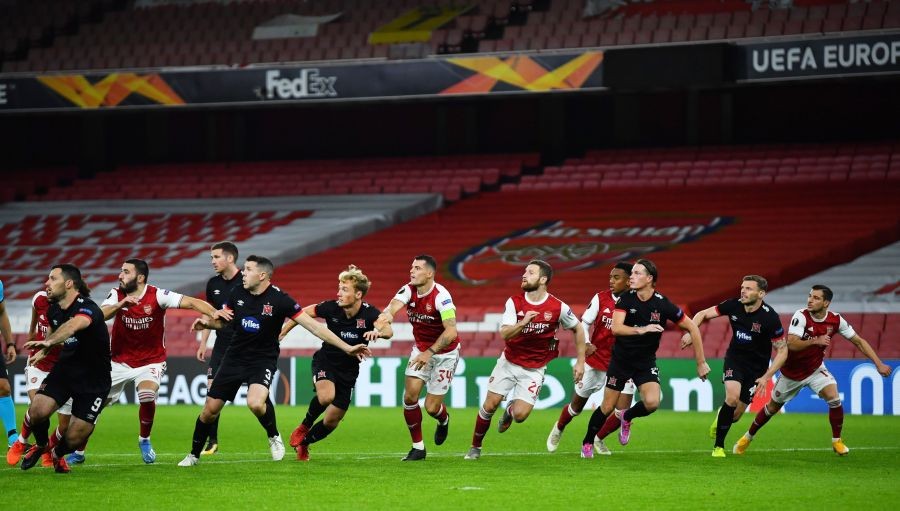 LONDON, October 30 (Reuters) - A flurry of goals either side of halftime from Eddie Nketiah, Joe Willock and Nicolas Pepe gave Arsenal a comfortable 3-0 Europa League win over Irish side Dundalk on Thursday that puts them top of their group after two games.

The 2019 League of Ireland champions defended bravely, but their resolve was broken in the 42nd minute as goalkeeper Gary Rogers failed to get enough on the ball when punching away a corner and Nketiah fired home from close range.

Willock added a second before the break, snapping up the rebound from a blocked shot by Pepe and slamming the ball beyond Rogers as Dundalk's defence crumbled.

Things went from bad to worse for the visitors in the first minute of the second half as Pepe cut onto his right foot and curled a superb shot into the top corner to make it 3-0 to leave Dundalk reeling.

The visitors rarely managed to threaten a makeshift Arsenal defence with midfielder Granit Xhaka slotting in at centre back for a period, and as the game wore on Dundalk struggled to get out of their own half as the Gunners coasted to victory.

The result puts Arsenal top of Group B on six points and ahead of Molde, who beat third-placed Rapid Vienna 1-0, on goal difference. Dundalk are bottom with no points.