BJP led coalition government in Manipur on 'brink of collapse' 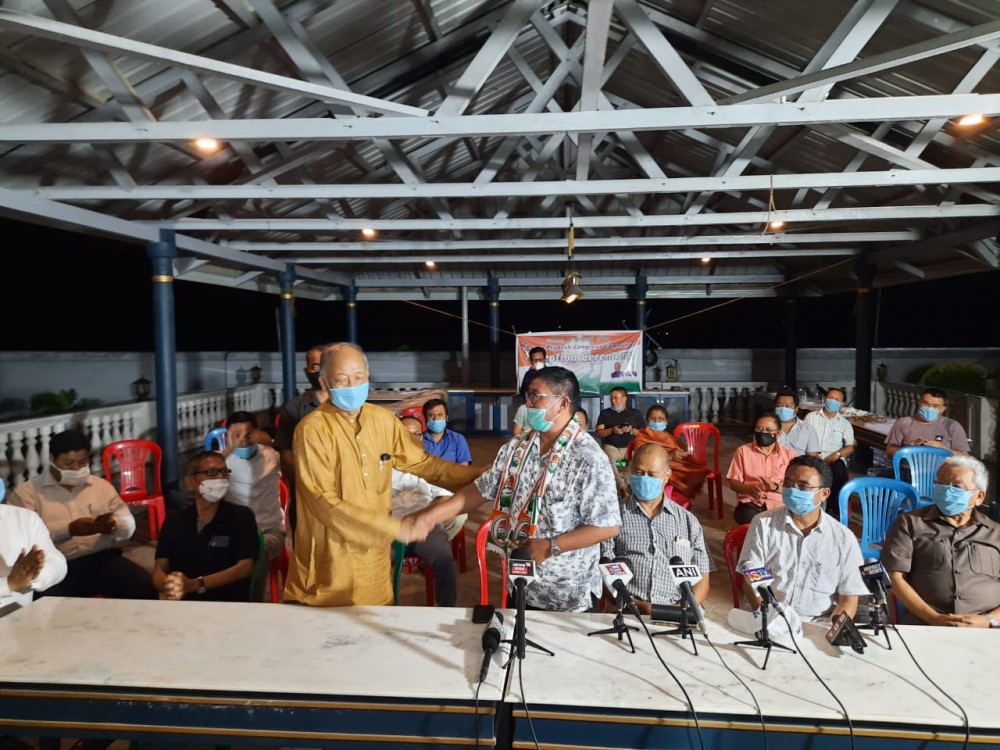 Congress leader and former Manipur Chief Mnister O Ibobi Singh welcoming the three sitting MLAs who resigned from the primary membership of the BJP and joined the Congress on June 17. (Morung Photo)

The N Biren Singh government in Manipur is in trouble after coalition partners NPP and others withdrew support from the ruling alliance led by the Bharatiya Janata Party.

On Wednesday, three sitting MLAs of the ruling BJP resigned from the party and joined the Congress while six other MLAs also withdrew support.

This new development cropped up while political parties in Manipur sat for the second round of meetings to oppose the proposed delimitation exercise in the state based on the 2001 census.

Interestingly, the meeting was hosted by state BJP at its temporary office in Imphal’s Canchipur this evening.

Sources said that all the MLAs along with lone independent MLA Ashab Uddin who represent the Jiribam Assembly constituency were in Congress camp after announcing their support to the party.

NPP legislators have also written to Manipur Governor about the party's formal withdrawal from the coalition government. “From today, we withdraw our support to the government,” leader of NPP legislature party Y Joykumar said at a press conference this evening.

He announced that the party will move a no confidence motion against the BJP-led coalition government.

The three BJP MLAs S Subhaschandra Singh, TT Haokip and Samuel Jendai submitted their separate resignation papers to the Speaker on Wednesday. They also resigned from the primary membership of the BJP and joined the Congress.

Meanwhile, happy with the development, Congress leader and former chief minister O Ibobi Singh told reporters late Wednesday that the party welcomed the MLAs who withdrew support to the Biren Singh government. Ibobi also said that the party is likely to form the next government.

According to Ibobi Singh, the party has enough numbers now to form the next government.

Number games in Manipur politics
In the 2017 assembly election of Manipur, BJP won 21 seats in the 60 member Assembly, Congress 28, NPP 4, Naga People's Front (NPF) 4, one Trinamool Congress, one LJP and one Independent.

Now, with three BJP MLAs joining Congress after resigning from their MLA-ship, BJP has been reduced to just 18 MLAs in strength. BJP is still enjoying the support of NPF and LJP.

Interestingly, 7 Congress MLAs who had defected to BJP right after the 2017 poll are facing a disqualification case.