Covid-19 vaccination: Can India deliver that shot to all? 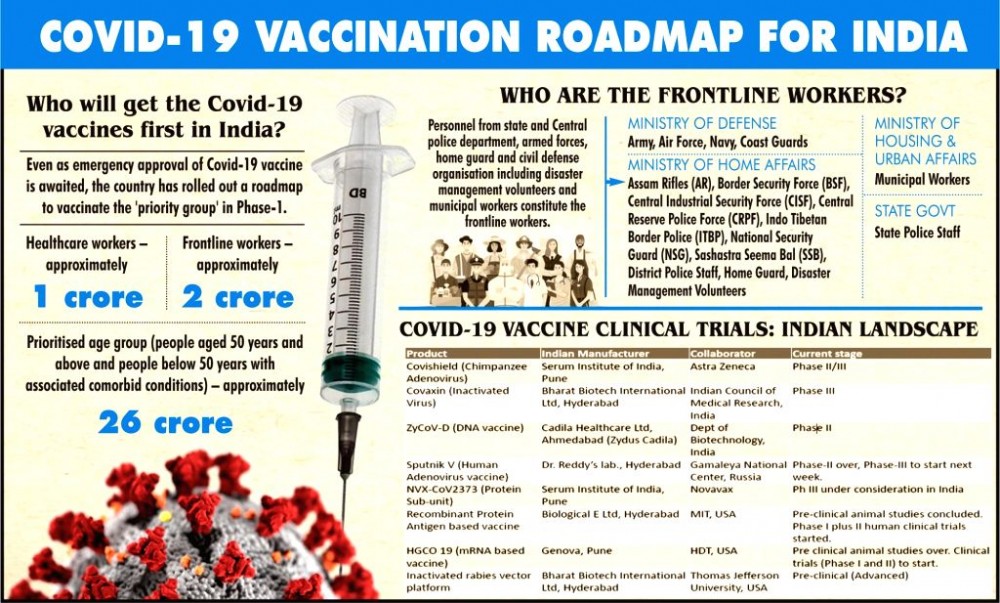 New Delhi, December 18 (IANS): As the wealthy nations like the US and the UK begin vaccinating their public, the road ahead for India does not look very rosy as both Pfizer-BioNTech and Moderna vaccines currently making headlines are yet to reach the country owing to a host of factors including scarce supply, tricky transport and an absence of proper cold chain.

For over 130 crore Indians, two promising vaccines -- Astrazeneca and Oxford university developed and Serum Institute of India (SII)-manufactured Covishield, and Covaxin by Bharat Biotech Ltd are still a distant dream owing to factors not in the control of the manufacturers or the government.

Sanjay Rai, who is the principal investigator (PI) of Covaxin trial, told IANS on Friday that the rollout of Covaxin may get delayed as the All India Institute of Medical Sciences (AIIMS), where its Phase-III human clinical trial is underway, is struggling to find takers of the trial shots.

However, Dr Harshal R Salve, Associate Professor at Centre for Community Medicine at AIIMS told IANS on Friday that hopefully, we will see approval for an appropriate vaccine in a month or so by a competent regulatory authority.

India has the world's largest immunization programme in the world with beneficiary of more than 60 million annually.

According to Salve, India has also demonstrated outreach and decentralised delivery of public services during general elections.

"These experiences will help India roll out the Covid-19 vaccination at the mass level. The use of IT is crucial in tracking and implementation of individual-level vaccination. However, administration of vaccine should be kept as a voluntary exercise and should not be made mandatory," Salve stressed.

However, due to scarce data on the Covid-19 vaccination and its mass-level efficacy globally, nothing can be predicted at this crucial moment.

An analysis by Duke University's 'Launch and Scale Speedometer', which is updated every two weeks, shows India has made deals for 1.6 billion doses of three global vaccine candidates upon them being ready and certified for use.

Globally, 10.1 billion doses were reserved even before any candidate was approved for market, showed the data.

"Countries with manufacturing capacity, such as India and Brazil, have been successful in negotiating large advance market commitments with leading vaccine candidates as part of the manufacturing agreements," according to Duke University's 'Launch and Scale Speedometer'.

Dr Neha Gupta who is infectious diseases specialist at Medanta Hospital in Gurugram said that the potency of vaccines depends upon the temperature at the storage level.

"Cold chain needs to be properly maintained. The government needs to keep a designated staff for the mass vaccination of healthcare workers, elderly population and patients with common comorbidities like hypertension, COPD (chronic obstructive pulmonary disease), diabetes and cardio-cerebrovascular disease," she told IANS.

The stark reality is that many countries including India may opt to use less protective Covid-19 vaccines that are more affordable and available instead of waiting for better, costlier shots.

But even the lowest reported efficacy so far, for the AstraZeneca-Oxford vaccine, could powerfully curb Covid-19's toll.

"If you'd asked me a year ago if we had the opportunity to deliver billions of doses of a vaccine that had 60 per cent, 70 per cent efficacy, we would have been delighted by that prospect," said Richard Hatchett, who heads the Coalition for Epidemic Preparedness Innovations, in an article in the prestigious journal Science this week.

The Serum Institute of India, the world's largest producer of vaccines, could boost supplies globally.

"It has signed contracts with the US biotech Novavax to make roughly 1 billion doses of its candidate, which is just about to start a large efficacy trial. And it will supply COVAX with up to 200 million doses of the AstraZeneca-Oxford and Novavax vaccines for low- and middle-income countries," according to the article.

To avert vaccine inequality, the Covid-19 Vaccines Global Access (COVAX) facility has been set up by the World Health Organisation (WHO) and its partners to help purchase and distribute proven vaccines.

But COVAX is strapped for cash and its impact remains to be seen.

"If in the first six months, Western Europe and the United States are the only regions that are vaccinating people, and other parts of the world are not being vaccinated until the end of 2021, then I think we're going to have a very, very tense global situation," infectious disease researcher Jeremy Farrar, who heads the Wellcome Trust research charity, was quoted as saying.

The truth is that current estimates depend on vaccine production running smoothly, and already, Sanofi Pasteur and Novavax have run into manufacturing delays.

"Many factors can trip up a vaccinemaker, including shortages of raw materials, equipment, or glass vials. In 2009, the pandemic flu vaccine was delayed because the influenza virus poorly replicated in eggs".

India has entered a critical stage and an absence of a vaccine for long will only create confusion and further deter millions from taking that elusive shot.