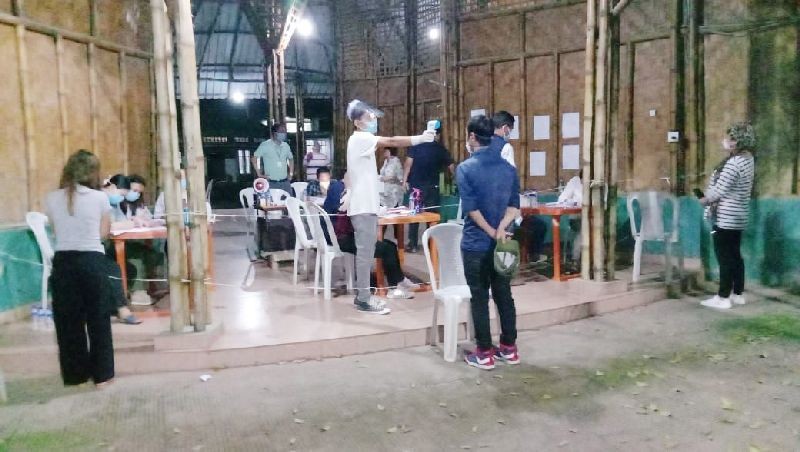 Returnees being screened by the Dimapur District Surveillance Team at the Agri Expo.
Morung Exclusive
22nd May 2020

Like surfers for the big waves, frontline workers soldier on

As Dimapur prepares to receive over 1400 returnees from Chennai on May 22, the District Surveillance Team shouldered with the job of screening and quarantining waited with bated breath of the work ahead.

While the state Health Department in general has come under stinging public criticism, this group of frontline workers from the office of the Chief Medical Officer, Dimapur has been going about their job like surfers waiting for the big waves. They have been without leave since January when the Nagaland state government began establishing the Rapid Response Teams in the districts.
With other north-eastern states reporting COVID-19 cases among returnees from Chennai, the job of the team takes new and heightened dimensions given the number of returnees involved.

Dimapur’s Surveillance Team comprises of over 60 personnel, including 25 doctors, 27 nurses (or officially Community Health Officers) and surveillance attendants. 11 other doctors and support staff are deployed in the various PHCs and CHCs in the sub-divisions.

The District Hospital, Designated COVID-19 Hospital, is a separate unit specifically for handling COVID-19 cases under the charge of the Medical Superintendent.

“Divided into smaller teams, we have been working 12-hour shifts. We are on the brink of a burn out but we have no choice but to persevere in the interest of all,” a senior doctor based at the Agri Expo told The Morung Express today.

At any given point there are no less than 16-18 personnel at the Agri Expo site in Dimapur which is the designated screening centre for returnees.

Initially, there were no resting bunks arranged for the team at the Centre. But there have been days when they had to work extended shifts or forego going home. “Thankfully, they arranged cottages within the complex for us,” he said.

Before the arrivals started on May 12, this team had to cope with issuing Medical Fitness Certificates to stranded people wishing to leave the state, followed by the rush for travel to home districts from Dimapur. “In total, we have issued around 39,700 certificates till May 20,” he informed.

With people still applying to leave for their home states, the screening centre at the DDSC Stadium is still functioning with around 6-8 personnel.

While the frontline workers do their assigned tasks, the doctor maintained that the public has as much responsibility guarding against an outbreak here. “We are also human. We are also worried just like any other ordinary citizen.”

Asked how the public can help, he said every citizen must ensure that the preventive measures as specified must be followed. While the Health workers would do its part, he cited Home Quarantine as a big concern as it will be up to the individual and the family.

There is also the ‘returnees versus beds’ problem. According to him, there are around 1500 beds in the designated quarantine centres in Dimapur. “1467 people will arrive tomorrow (May 22). Over a 1000 of them will be quarantined in Dimapur. We have people, who are already in quarantine, and we are expecting another train in two days.”

Meanwhile, the DIPR reported that on May 21, 57 more returnees reached Dimapur by train from New Delhi and Dibrugarh; 15 from Sikkim, 16 from Guwahati by bus and 11 other from Guwahati by personal transport. The total of arrivals stood at 1735 persons.