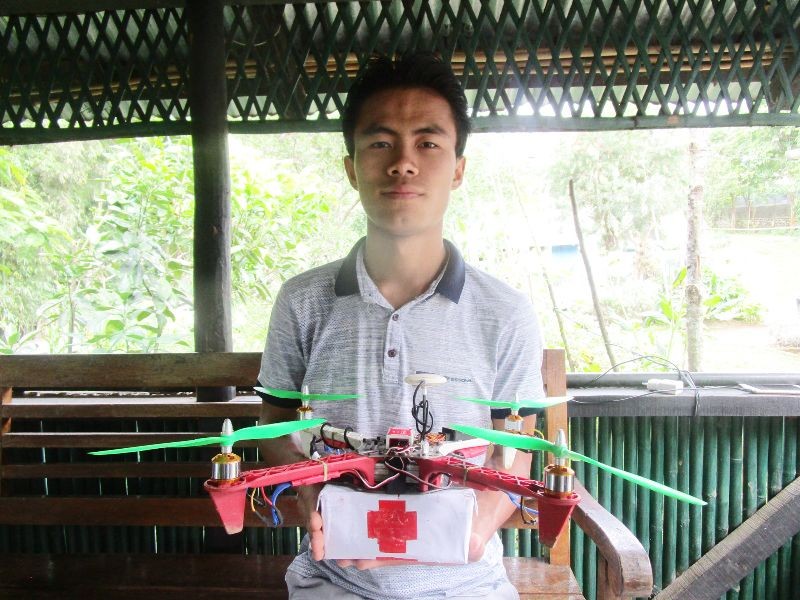 21 year old Ponachan Y Kikon from Wokha has built a DIY drone for delivering medicines and essentials with “zero contact.” A project borne out of personal interest has been developed into a purposeful innovation especially for the present pandemic times.

"While working on the project, one particular concept that came to my mind was social distancing," says Ponachan. The DIY drone according to Ponachan helps achieve social distancing and achieve one's goal. "It helps deliver medicines and essentials where the need of contact is not required, and also reduces the risk of transmission by contact," says Ponachan.

With further upgradation, the drone can be used for food delivery system.

The DIY drone which Kikon calls ‘Project X’ can accommodate medicines and essential items weighing 600gms which can be transported in the desired destination. The items are automatically detached with the help of a remote control.

The drone, for Ponachan, will be an effective measure to maintain social distance.

Kikon is a student of Automobile Engineering at Kelhoshe Polytechnic Atoizu, Nagaland. In between his studies, exams and assignments, the 21 year old researched and worked on building the DIY drone for almost 10 months with the help of free websites online.

For Ponachan, building the drone took almost ten months, since he worked on it only during his leisure time.

"I started from the basics, for my own learning. If you are trained by experts it will take a month. And If you have all the components available you can build in a day or two," says Ponachan. Further, placing orders of the components took time. In order to minimize the cost, he had to search and compare several sites where orders took months to reach his area. With his campus being distant from the urban areas, ordering the component materials was a challenge with most of the parts being purchased outside of India.

While the project was mostly developed out of personal interest, Kikon was driven after seeing the Nagaland Start Up Lockdown Challenge in Innovative Technology. Having experienced failed attempts while building the model, Kikon was discouraged; however the Lockdown challenge motivated him, and enabled him to complete the model last month.

From experience, Ponchan expresses that the first attempts do not meet one's expectation. "After gathering all the components, I thought it will be quite easy. How to make it fly, was quite challenging," says Ponachan who notes that his first attempts were not successful which let him to go back to researching and studying on the dynamics.

Following the successful completion of his DIY drone, Ponachan uploaded a video on YouTube where he received an overwhelming response. "Never did I expect this day. I found out that there are so many people out here in Nagaland, who are interested in building drones. I received calls and messages through  social media but it's not quite possible for me to explain individually," says Ponachan.

He is hopeful that the components mentioned can help interested people to build their own drones without facing the problems he went through. He also mentions that purchasing the wrong products might end up damaging the other electronic components

"It's a DIY project so I encourage anyone who have interest can build it," remarks the 21 years old.