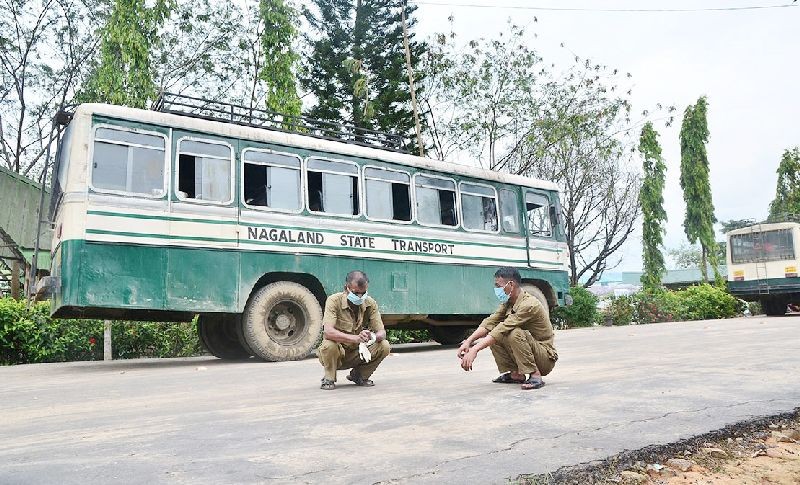 The role of sanitation workers has become significantly crucial for public health even as the COVID-19 pandemic has amplified the need for sanitation. Although often unrecognized like the drivers and the police, sanitation workers are part of the frontline workforce in the fight against the global pandemic as they silently perform their duties of collecting and disposing waste from several pockets.

In view of the situation, however sanitation workers under Kohima Municipal Council (KMC) were previously not included in any standard operating procedure (SOP) for quarantine. It was only on Thursday (July 16) during the District Task Force (DTF) meeting in Kohima that arrangement of a quarantine facility for them at IG Stadium came to light.

“I was also wary of my staff and had brought out the issue during the meeting,” Kovi Meyase, KMC Administrator highlighted. With effect from the day of the meeting, sanitation workers and staff of KMC will now go into quarantine at IG Stadium for 7 days and if tested negative, they will resume work on the 8th day, he revealed. Mention may be made here that one of the first positive cases that emerged under KMC was that of a field staff involved in sanitation work.

Meanwhile, 12 police personnel from the 4th NAP Battalion Thizama have been on duty at the COVID-19 Bethel Kitchen ever since it was set up. They have been lodged there while performing their duty during the day and have not returned to the camp since. When a positive case emerged, they were all tested but with their results coming out negative, the police personnel are continuing their duty at the Bethel Kitchen.

One of the personnel, Kevizhapu Kruse said that after the emergence of positive cases and resumption of the Kitchen after a couple of days, the District Task Force had sent 15 people to assist in preparation of food for the quarantine centres. Prior to that, churches have taken turns to manage the COVID-19 Kitchen. Currently, there are about 400-500 people in the quarantine centres at K. Badze and Meriema respectively. The police personnel will also go into quarantine before returning back to the camp, it was learnt.

On the other hand, NST drivers placed in Dimapur have been staying in two hotels near the bus station for the last 3 months and have not gone home for quite a while. A representative from the Transportation Committee informed that “we have all been stationed here for the last 3 months.”

“Only after testing and their results are out, they (drivers) will be sent home,” he said while also informing that on July 14, about 18 drivers were released from duty, after being tested twice and they would go into 14-day home quarantine as per SOP before they report back to duty next month. Similar procedure is being followed by NST drivers in other parts of the districts as well.

“We have excess drivers but few of them with medical record of pneumonia and TB and other medical issues have been exempted from duty,” he further revealed.

Currently, there are another 18 NST drivers in Dimapur and with no more special trains coming in, there are fewer people.

However, on a daily basis, the NST drivers go to the two Nagaland Check Gates five times a day- 6:00 am, 10:00 am, 2:00 pm, 6:00 pm and 10:00 pm. In the meantime, Rajdhani and Brahmaputra trains are regularly arriving with about 30-40 people stopping at Dimapur from each train besides via Air India and Indigo flights at the airport. Those currently coming in to the state are mostly non-Nagas such as military personnel it was learnt.