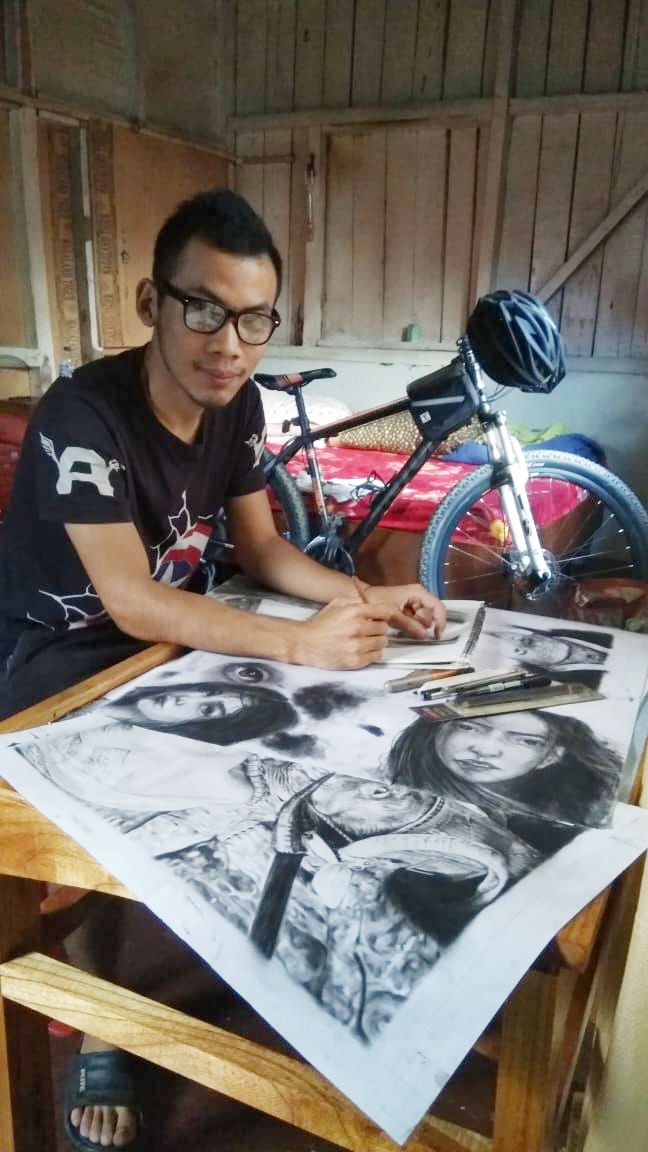 Nokmachier Jamir is a 24 year-old young, energetic man who loves to draw, sketch and cycle. He has been drawing and sketching since he was eight years old. Nokmachier particularly loves to sketch portraits and anime. Recently, Nokmachier has developed a love for charcoal pencils and has not stopped using them ever since he attended a six days training on charcoal and graphite work organized by Wandering Minds in Dimapur.

Nokmachier Jamir is the youngest among three brothers and resides in Ungma village.

Nokmachier is hearing and vocally impaired. He was a very naughty kid and he would fight and beat up every kid in the neighborhood," recalls his brother.  Nokmachier was send to the Deaf Biblical Ministry, Dimapur when he was seven years old.

He completed his schooling from class A to 10 at Deaf Biblical Ministry, Dimapur and returned home last year. “Nokmachier was a very naughty kid and we were finding it difficult to deal with his behavior. Now that he has returned home after all these years, we are so happy that he has grown into a fine gentleman and he is doing so much,” his brother, Along Jamir proudly said.

Nokmachier spends his day in his room either sketching a portrait or drawing anime. His love for art and his skills have caught the attention of the villagers and these days, Nokmachier takes orders from customers and earns a little or two from his hobby.

I want to make art my profession, he wrote. One day I would love to get a job through art, he added. Nokmachier communicates with his family and friends through sign language. Through his years of schooling in the Deaf Biblical Ministry, Nokmachier has learned that his disability is not a curse but a blessing.

“Nokmachier would visit families in the village who had differently abled kids like him and he would encourage their parents to send them to school just like him. There are a lot of parents who keep their differently abled kids shut at home”, his brother Along said. “Sending Nokmachier to school has been one of the wisest decision and we would like to encourage all parents with disabled kids out there not to shy away or keep their kids shut at home.”

Nokmachier leads a normal life at his native village. He visits friends and neighbours while he is not sketching or cycling and actively participates in all social activities of the neighbourhood. “Nokmachier is very positive and confident in himself. I remember one time Nokmachier performed a play in the church using sign language and just seeing him  moved me to tears”, one of his neighbours said.