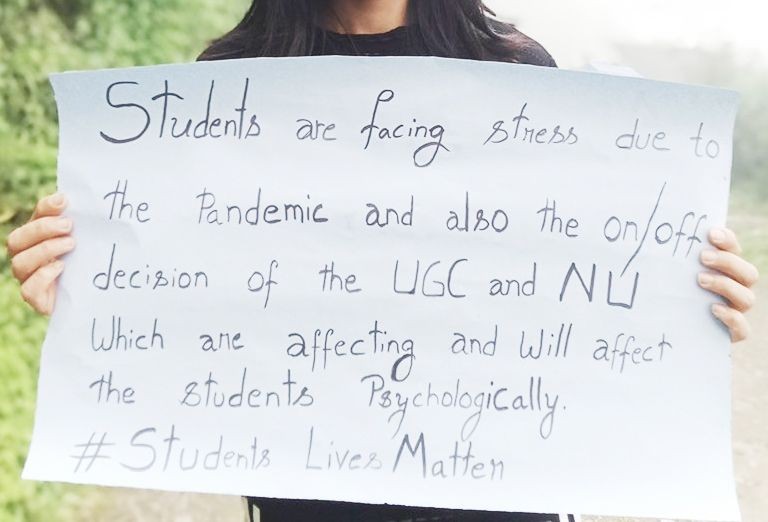 A students holds up a placard as part of an online campaign opposing the UGC's move to hold examinations during the pandemic.
Morung Exclusive
27th July 2020

Following the HRD ministry's decision to go ahead with the final year exams in universities, students across the country have been protesting against the move.

After the University Grants Commission (UGC) had released guidelines for conducting the semester and final year exams, students across the country started the hashtag trend '#StudentsLivesMatter' on Twitter to oppose the move.

On July 26, students from Nagaland also joined the online campaign against the conduct of examinations during the pandemic.

With banners and video messages, students voiced their concerns, joining the #StudentsLivesMatter campaign.

"Battling and conquering the pandemic crisis is more important than any degree received by sitting in exam halls," read one student's banner.

Another one read "If a student gets infected with COVID-19, will our government bear all the expenses of the students?"

Others questioned how the students who have already relocated to their hometowns will sit for the exams when the modes of transportation have been cancelled.

"It is not a wise decision to conduct exam during this pandemic as the number of positive cases are also increasing at an alarming rate," the students tweeted.

The concerns of these students and their accommodations were also raised.

The National Students Union of India (NSUI) Nagaland Unit on Sunday started its first phase of the online campaign, seeking the Nagaland Government's intervention in the matter with a series of tweets.

"Many Hostels, PG's, Institutions, etc are converted into isolation centers. So, during the  examination where will the students appear for the exams?" NSUI Nagaland questioned.

Many states have decided to cancel examination in their states earlier because they had accessed the ground reality if they conduct exams in their states. NU too must think about this ground facts if they care about the students, it said.

In its July 6 circular, the UGC had stated that institutions and universities will be conducting their final year and final semester exam by the end of September in offline (pen and paper)/ online/blended (online+offline) mode.

While maintaining that it is “important to safeguard the principles of health, safety, fair and equal opportunity for students," the UGC had also clarified that its decision not to scrap the final semester and final year exams is based on academic prudence and the need for maintaining credibility.

"What is the guarantee that we won't be affected by the virus in the campus?" questioned Mughatoli Kinimi on Twitter.

NSUI also questioned, "If a student gets infected on first day of examination how will he/she be able to attend or give the remaining exams?"

The Nagaland University, meanwhile had issued a notice on July 23 that the tentative exams routine dated July 16 will be revised/scheduled after receiving the concurrence of the state government. The notification is available on the NU's website.

Earlier, the Maharashtra state government cancelled final year examinations in June, stating that it has the power to do so under the Epidemic Diseases Act and Disaster Management Act.

But according to a PTI report, the UGC argued that these acts cannot be invoked to "render the statutory provisions of another special Act such as The University Grants Commissioner Act nugatory".

However students across the country have been unrelenting with some even approaching the apex court of the country against the decision.

31 students have filed a petition in the Supreme Court challenging the UGC circular on conducting of the final year examinations.

The students, in their petition, have sought the cancellation of examinations and that results of such students should be calculated on the basis of their internal assessment or past performance.

The Supreme Court is scheduled to hear the plea along with other pleas against the conduct of examinations on July 27.