THE SHOW MUST GO ON… 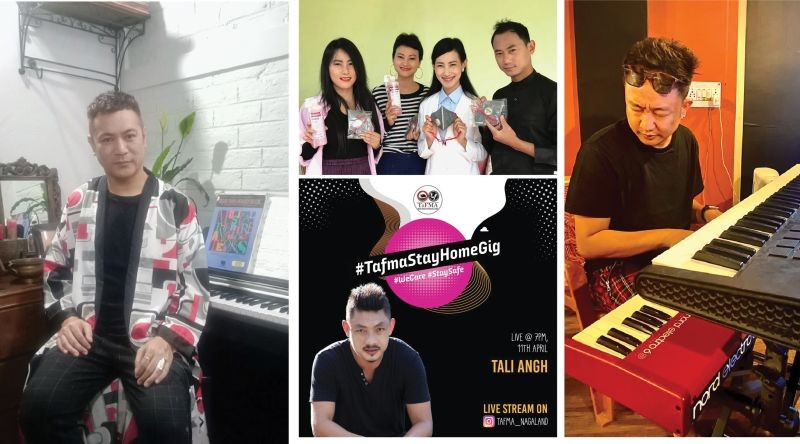 Full time musicians who typically earn on the basis of their shows and event performances are among the most affected during the Coronavirus lockdown. The months of February, March and April are the season of college fests and under normal circumstances; these festivals would have brimmed with activity, also generating some source of income for Nagaland’s homegrown musician like Alobo Naga.

The struggle is real

“The next season will start in August, September but I don’t think events will take place anytime soon because of social distancing. We don’t see events happening for a long while,” he expresses in an exclusive interview with The Morung Express. Unlike part-time musicians who perform only when they get opportunities and don’t depend on music for their livelihood, the struggle of musicians is going to go on, he impresses upon.

Divulging that studios are affected, music schools, shows, tour plans and the like, he puts across that “all my album plans have been delayed”. “For one or two months, we couldn’t really feel the pinch, but now we are feeling our only source of income is gone,” he regretfully states. Also pointing out that when you say music industry, there are a lot of people behind the scene such as the sound guys and technicians, he affirms that “everyone is affected now.”

The investment is so huge for sound system and with some of them doing it on EMI, they are also struggling to pay, he further highlights. Things may not look so promising at the moment but Alobo Naga is currently working on an album and hoping to do a tour once the lockdown is over.

For the Tetseo Sisters, “lockdown has been a nightmare for everyone but more so for full time musicians especially when it comes to the live music scene because that is the main source of income for us.” Highlighting that every event since March 15 got cancelled, Mercy Tetseo expresses that, “we did have a bunch of digital events and online events which were done pro bono and well received but in the long run, that's not going to add to our income.”

“The only plus would be connecting with newer audiences since almost everyone is looking for entertainment online,” she reveals.

Making little adjustments but not disappointed

With close to 15 years of writing and making music, Tali Angh is just happy that he is getting enough time to write new songs amid the coronavirus lockdown. “One of the topmost concerns for the musicians’ community, he points out, was how they are being affected, and initially, I have had to make little adjustments but I have not been disappointed”, he expresses.

“On a personal level, I believe it’s also because I know the Lord, and God has been faithful,” he strongly affirms. Given the situation, he says, “I am focusing on what matters the most right now and what is more important to me as an artist is write fresh songs because I seem to have more time. In a way it’s helping me plan really well. Although it’s uncertain, on the positive side, I see myself filtering many of the plans that I have for the next year.”

He also feels that musicians have been able to reach many people during the lockdown, although they may not be able to generate money. Interestingly, he further observes that musicians in general including budding musicians are realising that “I don’t really have to be invited if I want to sing” while pointing to the increasing trend of many YouTube musicians, who are going live and sharing their songs. Of course, nothing can replace physical concerts/shows, but given the situation, we should be just happy, he impresses upon.

Good Opportunity to work on our music skills

“I feel this is a good opportunity for us musicians to work on our skills; a good time to go back to the heart of worship. I am also trying to practice every day which I didn’t get to do otherwise” is what Nise Meruno, Nagaland’s Piano Maestro feels in these turbulent times.

Stating that this is also when your creativity is put to test, he expresses that, “I have adapted myself fairly well to the new norm.” “When things were fine, all the musicians were just working on the exterior, trying to work on the music, doing shows and events but emphasizes that “this is a good time to have a reality check on how far you can go.”

On the flipside, he shares that “I am not used to staying in one place for a stretch of one month and so other than my travelling, I feel this is a good opportunity.” “Of course, when you talk about the monetary stuff, it’s difficult, but it’s not the end of the world”, he puts across with optimism.

He is also doing online classes, picking a lot of unfinished projects and writing songs. For people who have the gift of song writing, Nise Meruno feels that this is the ideal time.

‘Live streaming but the human touch is missing’

“It's been hard performing for a virtual audience with minimal interaction, - comments are real time of course when you are live streaming but the human touch is missing,” Mercy Tetseo expresses.

Pointing to the challenges of poor network and tricky moments of filming themselves on mobile cameras and learning how to edit on apps, she however states that “fortunately, we have a home recording setup so progress is being made. While we surely cannot wait to get back to touring, doing live events and connecting with audiences in person- we are making the most of our time at home with family and learning new things online.”

She further shares: “if the lockdown continues and pay per view online events becomes the norm, it would mean a technical upgrade for musicians too because we will have to learn, adapt and perhaps invest in gear for streaming high quality footage.”

Despite not been able to earn during the lockdown, she professes that it has been a blessing in allowing them to reach out to so many people online including artists they recently discovered. “We got to collaborate on projects which could only have been wishful in normal times due to priorities and other engagements that keep us from really working together. The digital space has made many connections possible as well, ironically. The uncertain time has also made people especially artistes, more open and supportive of each other for sure. Hope that part remains post lockdown as well”, she puts across.

Tetseo Sisters have been able to make a few digital projects and social media campaigns including the campaign song for International Day Against Drugs Abuse, which went on to win the prize.