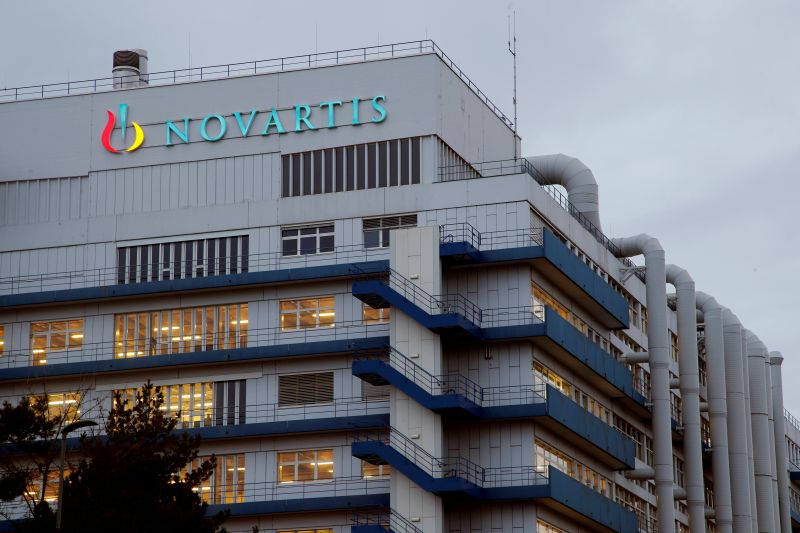 Logo of Swiss drugmaker Novartis is seen at its branch in Schweizerhalle near Basel, Switzerland on March 29, 2018. (REUTERS File Photo)

Both Gilead's Yescarta and Novartis's Kymriah - which are part of a class of therapies known in the medical field as “CAR-T” - were approved in 2017. But government and private health plans have balked at their high price of at least $373,000 for a one-time treatment before hospital costs, which can bring the bill for a single patient to over a million dollars.

Sales of both CAR-Ts - billed as potential blockbusters at their launch - have been slow to ramp up. Novartis, which has also struggled to meet U.S. manufacturing specifications, posted $58 million in second quarter Kymriah sales, while Gilead is expected to show $110 million in Yescarta sales when it reports quarterly results on Tuesday.

The novel treatments take immune system cells from each individual patient and re-engineer them to better fight certain blood cancers, keeping nearly 40 percent of patients alive for more than two years, according to some studies.

Yet the federal government's Medicare health plan for seniors, estimated to cover more than half of lymphoma patients eligible for a CAR-T, is still figuring out payment terms after nearly two years of delay. Private insurers are only covering the cell therapies on a case-by-case basis, rather than setting standard coverage guidelines as they usually do for new drugs.

Between Kymriah's approval in May 2017 and December 2018, one quarter of nearly 900 adult lymphoma patients treated with CAR-Ts were enrolled in clinical trials, according to healthcare consultancy Vizient Inc.

That is unusual since patients generally seek to first use treatments approved by health regulators before considering an experimental drug being tested in trials. A recent National Cancer Institute study estimated that no more than 8 percent of all cancer patients participate in trials.

Vizient analyzed health insurance claims from 58 major U.S. hospitals, including most of the centers authorized to administer CAR-Ts. The consultancy found that medical bills for clinical trial patients, who receive the cell therapies free of charge from the drugmaker, were about 50% percent lower than costs for people treated with Yescarta or Kymriah on a commercial basis. CAR-T patients are almost always admitted to a hospital to monitor for severe side effects.

"Inadequate inpatient reimbursement, especially for Medicare patients, can be a significant deterrent for hospitals to use commercially approved CAR-Ts," Jennifer Tedaldi, associate principal at consulting firm ZS Associates, told Reuters. She said some hospitals instead refer patients to clinical trials, or choose not to use CAR-Ts at all.

In a sign of the wide array of trial options, the Lymphoma Coalition estimates there are 120 mid- and late-stage U.S. trials for advanced diffuse large-cell B cell lymphoma (DLBCL), the indication that Yescarta and Kymriah are both approved for. They include studies that combine Yescarta or Kymriah with other treatments in the hope of making them safer and more effective, as well as competing CAR-T therapies and other novel approaches for attacking blood cancers.

"CAR-T is a very active space given its potential promise as a one-time curative therapy," Novartis said in an emailed statement. "As part of our commercial program, we take into account a percentage of patients that are likely to be treated via clinical trials."

Officials at Gilead said the company is working to expand commercial use of Yescarta, and more oncologists are referring patients as word gets out. "Overall the percentage of patients going to clinical trials is small," said Remus Vezan, head of clinical development, at Gilead's Kite cell therapy unit.

The University of Alabama's O'Neal Comprehensive Cancer Center, said it now refers about a quarter of its lymphoma patients to clinical trials. The Birmingham-based center is authorized to administer Yescarta, but has not yet used it for a paying patient for lack of insurance coverage.

"We are actively negotiating with the payers ... this is an expensive treatment so they want to have confidence in us," said Dr. Amitkumar Mehta, head of the center's lymphoma program. At the same time, "not all patients will qualify for a clinical trial. It is a trade-off. There is a benefit on the cost, but at the same time you are getting an experimental therapy."

The high percentage of patients heading to CAR-T trials could skew Medicare’s reimbursement calculations, which are based on average costs. The Centers for Medicare and Medicaid Services in April sought public comment on “how to address the significant number of cases involving clinical trials.”

The American Society of Hematology urged the agency to exclude trial cases in its calculations, citing claims data showing average pharmacy charges for clinical trial patients near $100,000, compared to over $600,000 for non-trial cases.

Medicare has also proposed raising its maximum CAR-T payment to 65% of estimated costs from 50%.

"There have been some promising signals, but we still do not have a clear pathway for Medicare payment," Jack Kolosky, chief operating officer at Moffitt Cancer Center in Tampa, Florida, told Reuters. He said Moffitt has $12 million in unpaid Medicare CAR-T claims and expects at least that amount in the current fiscal year that began on July 1.